http://crushingskulls.blogspot.com/  whoops, not sure how I've missed then so long. 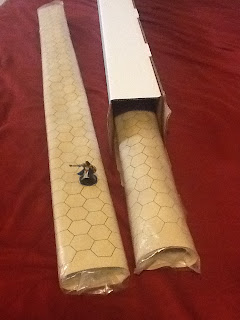 I got very many vinyl, one sided hex battle mats wholesale. They're 48" by 34.5" (each) with black 1" hexagons. Combined they provide four feet by almost six feet of play area. I'm selling two battle mats shipped (USA) for $25.  An amazing deal IMHO.  If you're local to Austin, TX I can get them to you even cheaper if you're willing to pick them up.
No comments:

[mwschmeer has been collecting these "Sithogy" posts into a Google Doc, cause he's awesome like that.]

Evil cultists, witches and sorcerers may learn the profane rituals required to create Slithering Stalkers, a sort of undead snake assassin. Any snake or snake like creature can be turned into a Slithering Stalker. Source creature's Hit Dice determine stalker's HD and must less than or equal to the HD/level of the ritual's performer. The ritual requires days of preparing ingredients, cursings, vile acts, and the like. 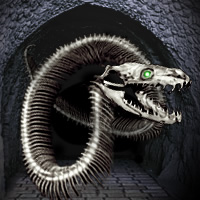 Once completed the Slithering Stalker will relentlessly seek out its victim. Supernaturally able to track them over any distance. Stalkers are masters of silent movement and concealment. Stalkers generally ignore distractions, but if forced, will attack and kill anything preventing it from reaching its victim.

Stalkers are undead constructs and have the typical immunities and resistances of those creatures. Assume Thief skills as level equal to twice Stalker's HD. Higher HD 6+ proly get to be invisible or ethereal, etc. A single touch by stalker will slay it's victim (PC's proly should get a save) or perhaps use assassination mechanics. Other stats should scale by HD, the source snake stats good place to start. AC should be on high side.

In my Temple of Elemental Evil campaign the party unwittingly provided Screng the Witch of Nulb with the ingredients required to construct a giant (from 30' boa constrictor) Slithering Stalker. [This was one of my greatest DM deceptions, spanning half dozen sessions over more than 6 months real world time ;)]. The party learned of their culpability and sent warning just before this stalker murdered The Arch-Cleric of Veluna. Casting Veluna's war with Iuz into further chaos. Something like this (background machinations, time pressure (warn victim before snake gets there), etc), rather than just straight up "kill the monster" is what stalker is good for.
1 comment: