Blogs added to the Roll and semi-arbitrary why.

http://dungeonfantastic.blogspot.com/ - Mega dungeon best practices.  [Although, for Mythic Dungeons my rule is doors don't have hinges and open away from players, even on both sides :)]

http://evilbaboons.blogspot.com.au/ - had me at baboons, LOVE the style, lots of numbers and analysis. This may be my new favorite simian flavored blog.
1 comment: 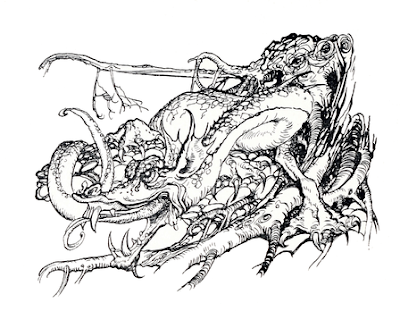 This is not a complete "game". It is mostly listing of playable character classes and info on houserules and other stuff players might need to know. Many charts and supporting rules are in companion Referee Charts. Both lack spells, monsters, magic items, significant setting details. All of which are available in Swords and Wizardry and a bazillion other sources.

Couple weeks ago my OSRIC Temple of Elemental Evil campaign ended in partial defeat for to forces of "Rather not get turned into a fungoid slave of the demoness Zuggamonty, thank you very much".  [The party could have continued But, 1) DM was a bit burned out on the complexities, fiddly bits, and inconsistencies of AD&D, 2) DM plays hard and gives the players the story they create. In this case it would be one of disease, melting body parts, and being outmatched by a 80% freed demon queen.]

All is not lost, I now, yay,  have time to (re)start Gold and Glory campaign, using Swords and Wizardry.

Seek plunder and fame under the broken moon of a fantastic world where the demons cower from elder, unfathomable things from out of space. Where just beyond the horizon mutants and robot worshiping orcmen wield the fire lances of the ancients. Where the grey "Valkyrie" riding circular, silver sky-chariots transport the most glorious warriors to "Valhalla". Where Morlocs brandishing black powder boom sticks are a playable class.

In other words an almost anything goes post-apocalyptic, fantasy, cthulhu romp 'round the sandbox of our imaginations.

Swords & Wizardry and this campaign make it easy for players to come and go, join in the middle, etc. Rules are simple and characters are quick to roll up. New players welcome. The rules are free to download. All you need are dice (and you can borrow some of those until you get your own).
No comments:

This awesome dude, Mathew, put together a Google Doc of my Sithogy posts.  Which I hope is publicly shared. 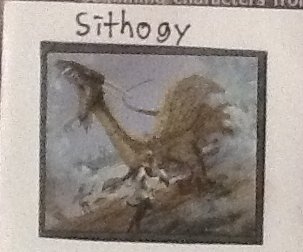 The tale of what happen when players in my OSRIC campaign Raided Sithogy's Lair.  And the first post describing Sithogy the Black and his Lair. 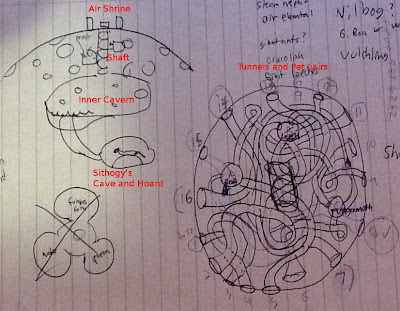 We Play to Win

I just wrote this to prospective player in my Swords & Wizardry Gold and Glory campaign.


It is an "old school" game.  It's fairly tough, gritty and leans towards the "game" aspect of D&D (vs shared story time). We roleplay but that is not the point of playing.  We play to "win" that is to survive to 9th level and retire healthy, wealthy and wise.  The obvious (but not only) path to that is to form a gang of like minded individuals, go kill things and take their stuff.

I like it.  It is a good description of the kind of campaign I think of as OD&D "old school".  The emphasis on game vs storytime.  You can "win", you can "lose".  But, win/lose doesn't matter much.  In either case you roll up and new character in 5min or less.

It's more of a personal challenge.  Can I make it as a fighter.  Ok, did that now let's try a mage.  Oh, what about this fighter with 6 strength? How awesome would it be to get him to name level! And not just class level, there's can we find and survive the 4th dungeon level.  Find this, do that, etc. etc.

This challenge / reward cycle is the root of many old-schoolisms;  random abilities, permanent death, no dice fudging.
No comments:

For my upcoming Gold and Glory campaign I was considering using d24 and d30 for some attack rolls.  For some weapons like black powder pistols, rayguns, and hvy crossbows. And I've been using roll two d20's and take the lower / higher roll in place of various +4 bonuses (like vs invisible or vs unawares).

I was curious what comparative odds where.  So, I wrote a litte test program using my Die Python dice library.

I'm no longer so sure I like 2d20(best/worst) as general mechanic. Kind of extreme, less than 7 (or more than 14) 50% of the time.  All the other rolls are strictly linear and 50% is in the middle of range.  Linear curve (except stats) is one of the things that make D&D, D&D.

It's not SAVE OR DIE

It's you are dead.  Would you like roll a save to see if the gods grant you a second chance? 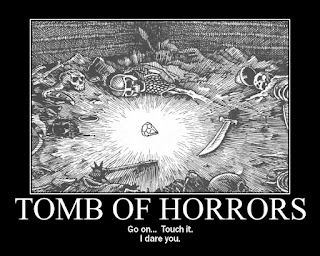 Zocchi wins! Also shave of the bit of flash, which I thought everyone knew to do?  But, translucent plastic is a flippin retarded idea for something you need to read, quickly, accurately from probably farther away if you roll like a spaz, I do.
No comments:

Long ago, in my 3.5 campaign, the party found itself on the "Dungeon Plane".  All I knew about that plane at the time was; it was "old school" (so only spells and powers/feats from base (DMG, PHB) books worked) and it needed to be randomly generated endless "mega dungeon".  Wanting to avoid distraction of rolling up during game but wanting the dungeon to be unknown even to me I wrote this little DMG Appx A Dungeon Generator program to automate things.

Here's what it looks like running.  It's text mode prompting "Adventure awaits:" which I either respond with