South Austin Two day RPG Convention.  Role Play Rally is 100% Adventurer's League. Which fits into my recent interest in AL. I mostly DM and was really jonesing to play (as a player).  I knew I couldn't commit to a campaign or regular schedule.  Adventurer's League to the rescue. It has downsides, because it's rarely the same group or DM, there less campaign/character/story building.  But you can take and play your character anywhere. Back to Role Play Rally ...

The highlight is the "Reclamation of Phlan" Epic. Multiple groups will be playing the same adventure at the same time.  One table's actions can impact the others. It's neat concept and I'm excited to be participating as a DM.


See you at Role Play Rally! 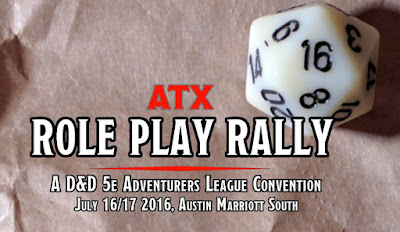