GOG, Good Old Games, packages up classic games (scanning manuals, stripping out DRM, etc) and sells them for very reasonable prices, $3-10.  I've bought several games from them and have been nothing but impressed.

Until Feb 27th they are having buy one get one free and including Temple of Elemental Evil as free bonus. 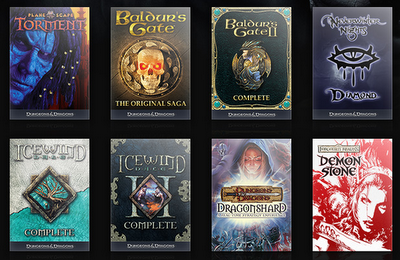 These are the charts (in a thin 3 ring binder) I have front and center at the table when running Gold and Glory.  Most recently for coworkers Weds after work.  It's a compilation of stuff from all over.  It's concise, mostly charts and reminders for me.  Most of what I need during combat is all on two facing pages.  Same for exploration.  It's very custom, for me, for this G&G campaign.  I post it mostly as an example and to get people to talk about their "at the table" resources. 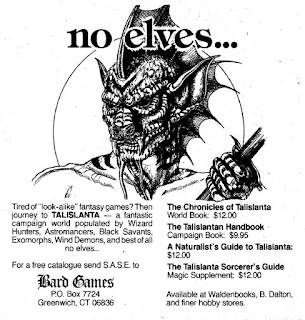 I really bought into ads like that one in Dragon Magazine.  I don't know why, but, when I saw that ad I thought, yeah, fuck elves.  I never liked (still don't) commonness, normalcy.   Back then (and still) every freakin RPG had the same elves, maybe shorter or taller.  But, all pointy ear, better than humans, long lived, douche bags.  The only thing worse than elves is having a dozen minor subspecies so that wanker min-maxers have more options to "build with".  Looking squarely at you 2nd ed.

I didn't read any Talislanta material until 25 years later.  It's freaky, Petal Throne freaky, 99 out of 100 players aren't gonna bother to get into it freaky because most people like commonness and normalcy.  I digress...

Almost all the Talislanta Stuff is Free Online now.  Five Editions plus d20 and 10th Anniversary.  An amazing wealth of unique weirdness to mine or spur your imagination.  And, wow that's a lot.  Someone was must have been playing this.  Who?  Do you live in Austin?


Talislanta is a truly fantastic place with dozens upon dozens of exotic races and cultures, enough to fuel just about any type of fantasy campaign you’d like to run. Very few of these races are considered inherently good or evil. They are just different peoples with different ways of life. Talislanta itself is actually a continent roughly divided into seven large sections, each of which shares certain characteristics or qualities. There is no “baseline” race that populates most of the world, so you can’t learn about one race and thus have knowledge of how most of the world works.

Every race has its own geographic homeland, although many of them do travel the world and intermingle for business and other purposes. The lack of a standard and overly dominant primary race, like humans for example, really adds to the exotic feel and fantastic nature of the setting. A Talislanta campaign can easily be modified to reflect a variety of gaming styles, from cinematic “larger-than-life” Heroic Fantasy to gritty “by the skin of your teeth” Dark Fantasy. Talislanta focuses on breadth instead of depth. While there are so many different lands and cultures in the book that I won’t even attempt to count them all, due to the time and effort it would take, each of these lands or peoples is described in an average of about 3 pages.

Gamemasters should view this as a good thing. What it means is that you are given a vast world with limitless possibilities and well-defined cultures. At the same time you are spared the minutiae and laborious detail that other settings focus on.

Hmmm, sounds like nice old-school sandbox.  Hey, every setting should have cheezball (that's a compliment) video overview like this one.  [D&D Mystara is another]

For all those people getting the 1st Edition Advanced Dungeons & Dragons reprints this April.

Spread this link far and wide, email it to friends, blog it, post it on forums.  This is your chance to welcome newcomers and show everyone that 1stEd Advanced Dungeons & Dragons is a living, breathing game.  Loved and played by many today, now and tomorrow.
Add to the list, but only after reading the guidelines on the 2nd tab, see bottom.
No comments:

When Demons Owe You

Short followup to the Death Birthsign.

When characters make sacrifices to demons, elder gods, etc.  They gain "favor" (also called "juice" by those in the know).  This favor can be called on when character needs a boon from beyond the pale.  Powerful boons that hopefully tempt the character into committing further acts of depravity that eventually will doom their soul.  Although, that's not something that needs to be revealed to the player right away ;)

Boring mechanics that should be fluffed up with whatever flavor suits.

How Much Juice?
Mundane animals and the like are worth 0 juice to demons.  Same with faries and others without souls, or whose souls reincarnate before the demons can get a tentacle round them. 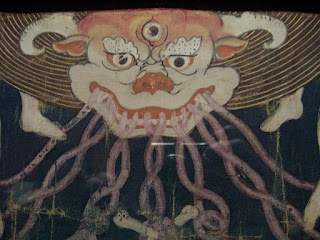 What is Juice Good For?
The default is to call for a "boon", aka wish.  Which is granted at a cost of 100 juice if supplicant has that much.  Otherwise, only granted on a d100 roll less than or equal to juice. Regardless of roll, juice is set to 0.

But, I'm open to whatever deal the player thinks they can finagle from the demon.  For instance if demon doesn't have particular interest in seeing character fail they'd probably give a save re-roll for 10 juice.


What do Demons do with Juice?
The enjoy it spread on whitest bread they can afford.  Of course. 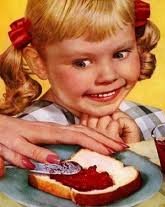 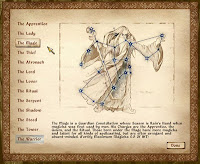 In The Elderscrolls: Morrowind, a computer rpg, characters are born under a particular sign.  Like the real life Zodiac.  But, based on in game lore and mechanics.  I've long thought this was a pretty cool idea to implement in my campaigns.

I'm fairly obsessed with "The Sword".  They have a song "Mother, Maiden, Cone" which inspired me to include a trio of "witches" in my games.  If the trio can be found, characters can gaze into their pool and have their birth sign revealed.  i.e roll d4 and consult the following table [I use five color based "alignment" and some of the effects might not make whole lot of sense unless you're using my house rules.]:

Black
Cloak Magically undetectable. Unlikely to be target of attacks.
Death Your victims go straight to demons who then "owe" you.
Leech When alive and < max hitpoints drain 1hp/rnd from each creature with in 10'r.
Master CHA raised to 18.  Gain subjects.
4 comments: 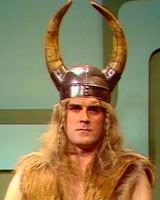 Warmongers are clerics of Thor (aka Ares, Mars, Horus) god of war, glory, and vengence. He is the ultimate warrior, the best at battle, and the great hunter of monsters. Warmongers are free agents seeking glory for Thor and themselves through victory in battle and the destruction of unnatural monsters.

"Bloodlust"
After dropping foe, roll free attack against different foe that is within range.

"Rampage"
Declared after successful hit. Keep making attack rolls until you miss or choose to stop. If you miss, your turn is over and you are over-extended; no action next round. If natural unmodified roll <= number attacks this round you're exhausted for d6max rnds; 2x(worst), no attacks, 1/2 move. 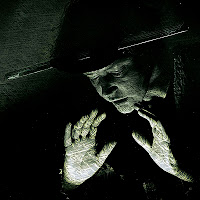 "Scholarly"
Automatically learns one language per level.  May engage in Arcane Duels.

The finalists for the 2012 Three Castles RPG Design Excellence Award have been announced.  The award winner will be announced in June at NTRPG Con.  Judges for 2012 are Dennis Sustare, Sandy Peterson, Steve Marsh, Zeb Cook and Rob Kuntz.

Congratulations to all this year's finalists! 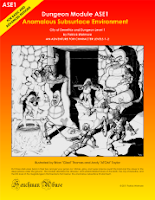 ASE1 - Anomalous Subsurface Environment by Patrick Wetmore [I was unaware of this until finalist announcement, it looks awesome. I'm getting this as soon as I post this blog] 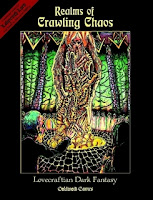 Realms of Crawling Chaos by Daniel Proctor & Michael Curtis  [I have this, it is awesome.] 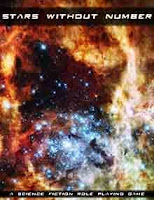 Stars Without Number by Kevin Crawford [I should get this, but have several other sci-fi systems to play first and no one to play sci-fi with :(] 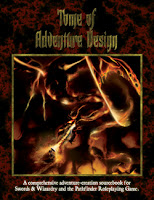 Tome of Adventure Design by Matt Finch and Bill Webb  [I have this (and the monster one), oh wait I have previous incarnation, this looks like collection, hmmmm]
2 comments:

Overlords are clerics of Set (ska Hades, Pluto, Hel) god of night, death and evil. He is The Deceiver, The Conqueror, The Emperor, and demands that followers strive for power and domination even unto death. Overlords are free agents set loose to subjugate the weak and destroy all who oppose Set's will. There is great enmity between the church of Mitra and the church of Set.

Law Givers are clerics of Mitra (aka Athena, Minerva, Tyr, Ra-Maat) goddess of law, justice, war, and civilization.  Mitra defends the helpless and protects the weak.  In return she demands strict adherence to her Law.  Law Givers are free agents empowered to bring The Law to both believers and non-believers.  There is great enmity between the followers of Mitra and the followers of Set.

Druids with 13+ WIS earn 25% XP bonus.  They must have a WIS of 16+ to earn 50% XP bonus.  May only use simple wooden bludgeoning weapons, i.e. those that don't draw blood.  May not harm animals, abuse nature, etc. unless in great need.

Druids are clerics of Dannu (aka Demeter/Gaia, Ceres, Sif/Jord, Geb) the goddess of mercy, compassion, home, harvest, and the Earth.  They are free agents that bring aid to the needy and freedom to the oppressed.  Druids seek a balance in the natural world and to banish unatural outsiders (demons, dragons, undead, seraphs, celestials, etc).

"Beastmaster"
May "recruit" animals as henchmen.