Long ago I ran a 3.5 campaign and needed "chaos paladins" for the bad guys, K'jore. Without any more explanation than that here's example output of the deathguard generator program I wrote: 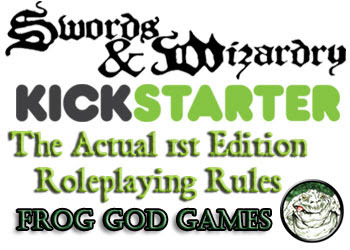 You have until Tuesday Sep 4, 5:00pm CDT to get in on the Swords and Wizardry Kickstarter being run by Frog God Games.

I'm in at (of course) the TROLL level!  I kind of don't even know why, already owning several copies of various versions of S&W.  I guess "it is going to be in brick and mortar game stores" tickles my fancy and augments my purely selfish desire to have more people to RPG with.  And Erol Otus art, Also, must have custom dice!

Check out the totally bad ass patch included at >= $30

There is (or was) a meme? to support local game stores. Maybe this is totally gone now that a generation has grown up not knowing a time before amazon, ebay, et al.

But, I'm old and still have that twinge.  And I (believe) I'm pretty supportive of local gaming and Friendly Local Game Shops.

I started Austin's RPG Meetup, current $funder and organizer of Austin's D&D Meetup.  There and elsewhere I promote FLGS.  I run games (campaigns, demos, newbie one-shots) at FLGS.  I created google map of FLGS. I spam everywhere about South/Central TX game conventions.  I buy something (OSR related if it's been on the shelves a couple months) almost every time I enter a game store.  Which gets hard (to find something interesting) when you game at one every other week.

But, esp with more "indie" games that many FLGS don't believe are profitable to carry is Kickstarter the new FLGS?  Why not "cut out the middle men"?  I remain "active" in the local game community but lately a lot of my money has gone this way http://www.kickstarter.com/profile/njharman

A Tale of Greed, Betrayal and Level Inappropriate Adventure

Being a true account of the shenanigans players from my Temple of Elemental Evil Campaign got up to  several months back.

Screng the Witch of Nulb manipulates a gullible group of "good" adventures into acquiring the ingredients needed to create a slithering stalker. For the last component, a giant boa constrictor, she promises them aide in looting Sithogy the Black's hoard.  This aide ended up being a Gem of Greed. Which supposedly would enable them to easily recruit "fodder" to distract the dragon while they safely purloined its pretties. Screng assumes the no longer useful adventures will be killed. If they somehow manage to best Sithogy, well just one more bit of dirty work the party has done on her behalf.

Interspersed between running errands for the chaotic evil, Iuz worshiping witch, the party also manages to do favors for Lareth, EHP of Lolth and favored son of the ToEE.  Same EHP that has been attempting to recruit the characters ever since they wiped out his minions garrisoning the 1-2nd level part of this campaign. Recently, the party accepted Lareth's gift of six water breathing potions to be used to "do away with" the barge that "block the view from my penthouse" in the Loose and Easy, Nulb's finest brothel and gambling house.

As referee I provide choices; some good, some ok, and some really bad. As an "evil" referee I frequently attempt to exploit player's (or their roleplayed character's) greed, pride, fear, and vengeance. I goaded them with mentions of how huge dragon hoards are, how long it took me to roll up all the magic items in it, and quick flashes of the long list of its contents [effects of the Gem of Greed, meta-gaming isn't just for players, hehe].  The known evil Screng encouraged and assured them success. NPC agents of good strongly cautioned against messing with Sithogy [both cause they either knew he was "too touch" or cause their agenda was/is to get party to beat down ToEE not dally with dragons].

I was surprised when players started seriously planning an attack on Sithogy. I feared they had mistook last several session's activities with Screng as "story arc" culminating in "raid the dragon" or that my cajoling had unduly influenced them.  So, I explicitly out of character reminded them of the barge "adventure" [which honestly was another (less) bad choice]. Also, of the ToEE adventure [the "best" choice campaign success wise]. Finally, reading directly from the Dragon's monster entry "fear aura all creatures less than 5HD must save vs fear or be screwed, suggesting that dragons are challenges ill-suited for 3rd level characters like yourselves." But ended with, "there's always a chance and I've seen y'all pull off the unbelievable.  So, if you really want to, don't let me convince you otherwise."

Round up a Mob

The party decided to propose a partnership with The Dwarves (five bearded fellows who run "Friday Night Croc Fights" outside the Waterside Hostel, and importantly for current endeavor have their own dwarven sized Drakkar). These dwarves had rebuffed the party's previous solicitation to raid Sithogy's lair (for Screng's boa constrictor). Despite party's success with that, they still thought if folly to mess with dragons. Then someone produced the Gem of Greed muddling the Dwarves' minds with glints of gold and sparkling jewels. After that it was a struggle to get the Dwarves to wait till daylight before embarking for Sithogy's Mound.

I don't remember all the details, I believe handbills were posted. Eventually 2/3rds of Nulb's finest were heading down river towards The Mound.  Including;


Notably absent was Tianna river pirate "Queen" or her peoples. 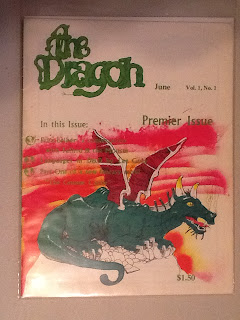 But We Had a Plan

As soon as lake is reached chaos ensues. For some strange reason the Chaotic Evil pirate types don't seem interested in following the party's carefully laid out plan. :)

The dwarves and Cruellea race for the mound.  Captain Roberts circles his galley around (looking to swoop in after others have beat each other up).  The party boards one of Resource's longboats and heads towards mound.  On they way Umi, Paladin of Kord, wants to drink the potion of water breathing but the party convinces him to wait so they can all do it together once on shore.


HMS Resources begins shelling the mound which brings Sithogy out.  His first acid stream melts most of the passengers and siege weapons on Cruelella's barge.  She summons water elemental with "Scimitar of Waves".  Dwarves beach their longship and scramble down first hole they find.  Otis dies.  Sithogy and elemental duke it out underwater.  If it weren't for a series of bad roles Sithogy might have bought it.  One last acid spewing strafing run and Sithogy returns to his underwater lair.

At some point the Paladin drinks a potion of delusion and askes "what does it do?", "what do you want to do?", "I want to be a black dragon", "you transform into a black dragon".  Paladin then jumps into the water and almost drowns. 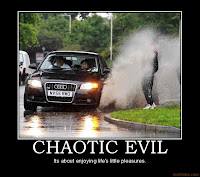 HMS Resource stops shelling just as party reaches shore (to avoid friendly fire and to flee the acid spewing flying lizard).  Together 6 of the player characters quaff the potions of water breathing.  I ask each for save vs death.  They are shocked that a chaotic evil priest would lie and give them poison instead of real water breathing potions.  [Actually, someone else switched the potions].  I think four of the players die on the spot. The rest decide to soldier on!

The eventually find their way inside mound and walk into Sithogy's barrels of oil / unseen servant / affect normal fires trap.  They watch the dwarves dig deeper into water filled tunnels where they drown or get ate by Sithogy.  Sithogy raises his head out of the inner lake and all of the party freeze, having failed their fear save.  Including the Paladin of Bahaumot wielding a dragon sword, the party's only hope at victory.  Sithogy lunges forward bites Paladin in half, takes halfladin and dragon sword (he now has two) beneath the murky water and back to his lair.  Surviving few collect their dead and leave.

As party is limping back to their hideout, Sithogy flys overhead towards Nulb. Swooping low enough to bellow "I'll have you for desert, annoying snotlings. But, first only witch will satiate my rage." [Sithogy only needed avg roll to correctly guess Screng was culpable for raid.   His "response" roll was very poor 1-2 So, instead of the expected cold, calculated revenge he flew off in a rage.]

After several days, curiosity overcomes fear.  The party goes to see the devastation wrought by Sithogy. They find none. Nulb, is emptier, but much as it always had been. An evil looking black dog is chained up outside of Screng's ramshackle hut.  The druids Speak with Animals elicits nothing but furious barking. Hruda, Screng's daughter, yells from inside hut "Sithogy, shut up!"  The dog growls under it's breath a vicious hatred

[I knew the witch would attempt to mislead, connive and lie, also that Sithogy was very truly pissed. Screng did not get the 19-20 roll she needed to "charm" her way out of this mess. Looking over my notes for "what next", noticed she had a devil's True Name (treat as wish more or less) I decided she used that to polymorph and chain poor Sithogy. Now, in back of player's mind is worry that Sithogy will get "free" and come after them, that they should try to somehow slay the dragon while it's still a "dog" or that they might "free" Sithogy themselves in ploy to take out witch, that something I haven't even thought of.  More player choices ;)]


Tianna, River Pirate Queen, being the only significant "power" left in Nulb quickly eliminates all competition and anyone who does not pledge fealty to her. Renames Nulb to Tianna Town. Being independent, capable and totally uninterested in aiding the temple. The ToEE has lost its local powerbase. Worse Tianna will soon be actively working against Temple interests. She will need to be dealt with. But first, something must be done about these pesky adventures who keep raiding the Earth Temple...

Also, a Slithering Stalker murdered the Archcleric of Veluna.
5 comments:

Table top role playing and board gaming convention to be held on a date to be announced, tentatively in October 2013. We are looking for GameMasters, Game Publishers, and RPG Writer/Designers.

Long ways off. But, spreading the word helping / hoping this one gets off the ground.  Austin really needs a RPG Convention.