A question a week, answer the following week, until I get bored or forget. All questions from the 2ed AD&D Players Handbook, Dungeon Masters Guide, Monstrous Compendium Volume I, and Monstrous Compendium Volume II. Even setting aside 2ed is one of my least favorites, most the questions are troll piss. Rule math minutiae. Aspects of 2ed I find too stupid to endure. Quite a few that are common knowledge to any player these days. Mostly in regards to iconic monsters that were relatively new and unknown back in 1991.


First up last week's answer; What gem is worth more filthy lucre, topaz or amethyst?  Topaz!  You should know your gemstones even if you don't play D&D.

I really dig using gem names rather than just gold piece value. But, there are too many of them. More importantly, detail and complexity needs to be applied were it counts / removed were it doesn't (something Gygax did not agree with). I want a little flavor, but not at expense of "playability", and it must be comprehensible to players (so they can make informed choices and don't just find a short cut and ignore your flavor as the nuisance it is). In my current campaign I use only two gems per tier (for most part) and there is some regularity; both 50gp are "stones", solid color means 100/500gp, transparent gems are 1000gp +.

A spell that produces matter or items from some other place (such as Evard's Black Tentacles) is a spell from what school of magic?  [5th level, the hardest? Seems most everyone (who's played 2ed or later) should know that.]
1 comment:

Swanhelm "Gift of the Elves"

Overly large, overly ornate, mithral helm of the finest elven craftsmanship. Styled in the form of a swan. With folded articulated wings and long articulated neck. Close inspection will reveal a cleverly concealed "butt plug". When removed, it reveals an empty cavity within "body" of the Swan. Which appears able to contain a fare amount of liquid.

Something like this first image but with equally large and obnoxious wings. Or, second image but four times larger. The opposite of practical/cool/macho/elegant. 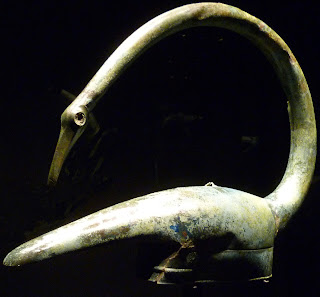 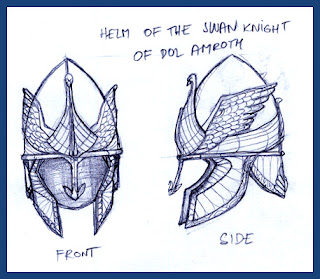 That second drawing from "Middle Earth something or another" forum which has a lot of amazing concept art. Worth checking out.

If liquid is in the Swanhelm when the command phrase is spoken "I have the Swan Power!"  the swan neck bends around and down. Its swan beak opens and squirts that liquid towards wearer's mouth hole whether bearer is ready to receive or not. About one dose of a potion or a big, manly gulp of ale per invocation.

Alternatively if "I bestow (insert name here) with the Swan Power!" is spoken, the chin strap will disconnect, the wings will spread open and the entire helm will "fly" to named person and deliver a squirt of liquid as above. It does not fly back.

Most scholars agree this item was created by elves weary of their boorish human allies too crude to comprehend elvish sophistication.

A question a week, answers the following week, until I get bored or forget. All questions from the 2ed AD&D Players Handbook, Dungeon Masters Guide, Monstrous Compendium Volume I, and Monstrous Compendium Volume II. Even putting aside that 2ed is one of my least favorite editions, most the questions are troll piss. Rule math minutiae. Aspects of 2ed I find too stupid to endure. Quite a few that are common knowledge to any player these days. Mostly in regards to iconic monsters that were relatively new and unknown back in 1991.


First up last week's answer; How much is falling damage. 1d6 per 10 feet fallen.

This bothers me for reasons from trivial to vital. 10ft even 30ft pits are nothing after a few levels. The, "oh I jump off cliff, get up and carry on cause max possible damage is less than my hitpoints" maneuver. Physics! Later editions even cap the number of dice, 10d6! That fall from orbit? Yeah, I walk it off.

I use to rule it was 1d6 cumulative; 10' 1d6, 20' 3d6, 30' 6d6, 40' 10d6, etc. and/or any fall 60' or greater is auto-incapacitation (often via death). That there is a reason to have Feather Fall, Levitate, rope, thieves, something. But, as I've matured (or become mentally decrepit) I've learned to be less bothered by things not worth bothering about. Now I just put spikes slathered with Save-or-Die poison at bottom of my pits :)

Which is of greater value, a topaz or an amethyst?
3 comments:

Most settlements village or larger will have an astrologer. A basic reading costs 10gp gets 2d6 roll. With a “sacrifice” of 50 gp or more roll d6 + d8. A great sacrifice, 200 gp or more, earns a 2d8 roll. Outcome effects entire group and lasts until next Downtime.

Useful only in cities. Abstracts together several related occupations hired to raise the social status of people in the Noble, Gentlemen, and Military hierarchies. Increase character’s Social Level (JG Ready Ref Sheets p2) by one if 2d6 die roll is greater than their current Social Level.

Spies are hired to gather information about a specific person, group or area. They are also used for sabotage, rabble rousing, rumor mongering and the like. The Referee will determine the probability of success based on the scope and difficulty of mission, the details and aide provided by players. Spies may or may not be reliable, and could stab the hiring character in the back. Maybe literally!.
No comments:

A question a week, answers the following week, until I get bored or forget. All questions from the 2ed AD&D Players Handbook, Dungeon Masters Guide, Monstrous Compendium Volume I, and Monstrous Compendium Volume II. Even putting aside that 2ed is one of my least favorite editions, most the questions are troll piss. Rule math minutiae. Aspects of 2ed I find too stupid to siffer. Quite a few that are common knowledge to any player these days. Mostly in regards to iconic monsters that were relatively new and unknown back in 1991.


First the answer from last week: How many eyestalks does a beholder have?  I'm reluctant to admit I was not sure of the answer, which is 10.  One central eye to neuter the MU and ten stalk eyes to waste the party.   From ODD "Supplement I Greyhawk"


BEHOLDERS: These monsters are also known as Spheres of Many Eyes, or as Eye Tyrants. The body of these creatures is a great globe of about 3' in diameter. Atop it are ten eye stalks, while in the center of the spherical body is a great eleventh eye. The body can sustain 40 points of damage, each eye stalk 10 points, and the central eye can withstand up to 20 points. The armor class of the body is 0. the eye stalks 2, and the eyes proper 7. Each eye functioning is a different manner: From 1-4 of the small eyes are able to function at one time.

Guido and Wanda are plummeting from a cliff. How much damage will they suffer when the smash to the ground below?


So, this question has a some style and flavor. I like that. Easy question. Although I disagree with the rule, I usually resist house ruling it. For reasons I'll discuss next week.

Putting together B/X Sandbox using Judges Guild Wilderlands setting, I of course have to create a setting & house rule booklet. Here are a couple rules I moved to "optional" and may drop all together. I have used versions of them before in OD&D based Planet Eris campaign. The sources include Judges Guild Read Ref Sheets (repartee and locution), Jeff Rients and quite possibly many others.


Characters may plead for Divine Intervention and may even do so when dead or unconscious. Characters of like belief should pray together and combine their levels in one roll. Different characters repeating a similar, recently ignored plea is a sure way to annoy deities. Beseeching higher powers more than once per Lunar cycle also risks incurring divine wrath.

The chance to be heard is the supplicant's level expressed as a percentage. Sacrifices relevant to the deity will improve this chance:


Deity's action upon hearing request is dependent on request and nature of deity. But, most will be something (even it's only to berate supplicant for being weak). Deities will refuse to aid non-believers. And will not directly harm any creature. 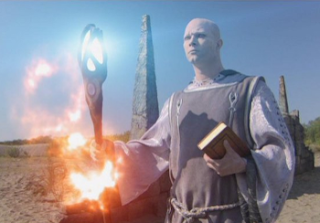 Clerics may verbally assault one another. Clerics who do not respond to an opposing polemic are immediately rebuked for their lack of conviction. Losing half their current Hit Points.

Each faith rolls two differently colored d6 (one "condemning" and one "extolling"). After rolling, each participant may replace a die roll with their level.

If both rolls are greater than the corresponding rolls of all other faiths, a devastating sermon has been served. All participants of other faiths must spend the next d6-1 rounds stunned as they rationalize away winner's arguments and reestablish their faith. Believers of the winning faith are inspired and get +1 on Saving Throws, To-Hit, and Damage rolls for duration of the encounter.

Otherwise, participants may "drop out" after first round having minimally defending their faith. If two or more opposing faiths remain, the theological throw down continues into the next round.

While sermonizing, participants are protected as Sanctuary spel. In addition if they take damage, the source of that damage is divinely rebuked, taking damage equal to amount dealt + d6.

A question a week, answers the following week, until I get bored or forget.  All questions from the 2ed AD&D Players Handbook, Dungeon Masters Guide, Monstrous Compendium Volume I, and Monstrous Compendium Volume II. Even putting aside that 2ed is one of my least favorite editions, most the questions are troll piss. Rule math minutiae. Aspects of 2ed I find too stupid to siffer. Quite a few that are common knowledge to any player these days. Mostly in regards to iconic monsters that were relatively new and unknown back in 1991.


First up, last week's answer; Name the Dragons types.  Chromatic (from root chroma meaning color) Red Green Blue Black White and the Metalics (metal) Gold Silver Copper Brass Bronze.  Traditionally the Chromas are Chaotic "evil" in modern parlance and had Tiamat the five dragon headed (one of each color) as their Queen / demoness.  The chromas are Lawful / "good" with Bahamat as their godhead. Many other dragon "series" have been added over time: gemstone, elemental, oriental.

How many eyestalks does a beholder have?