Reading B2 The Keep on the Borderlands

Because B2 was my first, I will always consider it the best. After getting Into the Borderlands and reading Age of Dusk review recently Ahead of starting Wilderlands sandbox I decided to have a deeper look at the DM advice and Keep portions which I maybe read thirty whatever years ago but have skipped past in more recent times. The tldr; is that it's pretty honking great. 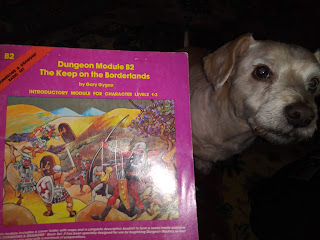 All quotes from "Dungeon Module B2 The Keep on the Borderlands" by Gary Gygax, copyright 1981 by TSR Hobbies, Inc.

"... for as DM you are to become the Shaper of the Cosmos. It is you who will give form and content to all the universe. You will breathe life into the stillness, giving meaning and purpose to all the actions which are to follow. The others in your group will assume the roles of individuals and play their parts, but each can only perform within the bounds you will set."

I'm a huge fan of B/X, at least how I run it, because it leans heavily towards "game" rather than towards "story time". It manifests as play over narration, as play over character "builds". Backgrounds, goals, character growth are emergent rather than preconceived and related. It has taken a fork away from narrative "story" games. [Some people like the narrative games. I do not.] B/X is just as cooperative, but players contribute through the actions of their characters, not as players spending fate points to alter the plot / world. There is a clear delineation between Referee and Players.


"It is now up to you to create a magical realm filled with danger, mystery, and excitement, complete with countless challenges. Though your role is the greatest, it is also the most difficult. You must now prepare to become all things to all people."

"Welcome to the land of imagination. You are about to begin a journey into worlds where magic and monsters are the order of the day, where law and chaos are forever at odds, where adventure and heroism are the meat and drink of all who would seek their fortunes in uncommon pursuits."

"... the DM must be a truly disinterested party, giving information as required by questioning and proper action, but neither helping nor hindering otherwise."

I fail at only giving information "as required". I want players to know too hard. I can't keep secrets. I always assume that is my fault when players don't "get it", whatever it is. So feel I owe them hints or 2nd chances. Also, if I'm honest, I want players to see my hard work, my "clever" secrets, etc. I don't have a problem with them turning left when the adventure is to the right (not a no good, dirty railroader). But once they're in the adventure and so close to discovering some "truth" or planted foreshadowing, I can't help but give it to them.

What's even worse; many players do not thrill at discovering the "world building", figuring out secrets, seeing how it is all connected, etc. as much as I do. So, not only are they fine with "not getting it", they probably don't enjoy me ramming it down their brain holes.

"In this game, the action is only limited by the abilities of the character, the imagination of the player, and the decisions of the DM. The play will often go in unexpected directions and the DM will sometimes be required to decide on situations not covered in the rules."

I know (cause they designed 3ed and too many other games) there are people that want everything defined, explained, codified. I just wish they'd learn that that doesn't work for RPGs.  All those pages and pages of crufty rules is better handled by the above two sentences.

That last bit! You may not agree with it. I may not be correct in believing it is true. It ties into wanting my RPG to be more of an active game and not just passively "play acting a story". In games, to do well, you must play well. You can't win or lose D&D, but you can fail at it. And it is your responsibility to not fail, not the DM's not the other player's.

Being not out to punish players is obvious. Not ensuring players always win doesn't seem to be as well understood. For play to be satisfying, there must be risk of failure. Players must have bested the challenges put before them by their own wits (or luck). If success is pre-ordained, then they're not playing a GAME. They are reading a (probably poorly written) book or watching a (definitely low-budget and poorly acted) movie.


"Throughout all this -- making decisions, playing roles, handling monsters -- the DM must remember that he or she is in control. The DM is the judge, and it is his or her game. The DM should listen to the players and weigh their arguments fairly when disagreements arise, but the final decision belongs to the DM. The Dungeon Master's word is law!"

Man, I really wish that last sentence wasn't there. It's redundant and just pushes things in antagonistic way. I can see esp younger, less mature DMs remembering that and not the excellent and balanced previous bits and using it to be a dick.


"After the party leaves the dungeon safely, all surviving player characters should divide the treasure and be awarded their experience points. Division of treasure is the players' responsibility."

I try to push treasure splitting on party. I do not interfere when the thief steals shit.


"DM Note: Have each player identify his or her character's name and profession. Have them answer in their own words why they seek entrance to the place. If they answer sounds unnatural, assume the role of the corporal of the watch, and begin to cross-examine the speaker. Now is the time to make the players realize that whatever they say -- as speech or relating their actions -- will be noted by you, as Dungeon Master, and acted upon accordingly in whatever role is appropriate to the situation."

I distinctly remember in games I ran 20+ years ago vs those in last 10 or so everyone being in character most of the time. Players talked and acted in 1st person. Not in funny voice/acting.  Just saying "I open the door." vs "

I usually start campaigns, in media res, at or in the "dungeon", often with an ambush. I like action, and new players never know what to do and everyone putters round town forever! But, I'm definitely using something like this from now on. Since I still don't want to start "in town", I'll have a patrol question the characters. Then jump to the dungeon. Knowing the people I usually play with they will probably antagonize and fight the patrol, ending up dead or in jail instead.

[To the players] "Of course you are inexperienced, but you have your skills and a heart that cries out for adventure. You have it in you to become great, but you must gain experience and knowledge and greater skill. There is much to learn, and you are willing and eager to be about it! Each of you has come with everything that could possibly be given you to help. Now you must fend for yourselves; your fate is in your hands, for better or worse."

This is only applicable for specific old-school, non-heroic style of game; "you have everything... fate in your hands".  The history of your character begins now. You will be judged based on your actions henceforth. You start as nobodies, clean slates. No backstories, no angsty youth, no secret bastard of the king.

A question a week, answers the following week, until I get bored or forget.  All questions from the 2ed AD&D Players Handbook, Dungeon Masters Guide, Monstrous Compendium Volume I, and Monstrous Compendium Volume II. Even putting aside that 2ed is one of my least favorite editions, most the questions are troll piss. Rule math minutiae. Aspects of 2ed I find too stupid to siffer. Quite a few that are common knowledge to any player these days. Mostly in regards to iconic monsters that were relatively new and unknown back in 1991.

Dragons come in two major varieties: chromatic and metallic [that would have been a decent if dated trivia question right there].  Name the chromatic dragons and then name the metallic dragons. Almost every year I drive over to  Rice University in Houston for one of my favorite local area game conventions, Owl Con.  Reasonably priced, easy going, not crowded, but big enough to have interesting stuff.  Very well run by the University's RPG club, after doing it for more than three decades, they got their shit figured out. The campus is nice, plenty of inexpensive parking. Depending on your events, it can be a bit of walking back and forth.

RPGs old, new and everything in between. Boardgames. A few miniatures. Several companies demoing new games.  Lots of open gaming. I don't remember any huge CCG events/tournaments but I'm sure there is some people doing that.

Deep in the land of Greyhawk, evil stirs in Whistmire Swamp. Rumors of cults whisper through nearby taverns while villagers go missing. Merchants who challenge roads through the swamp speak of strange magics. And many swear by sightings of dragons in the night sky. Who will delve into the swamp's ire, who will brave the dragons' breath?

Reflections in the Dark Mirror

Something is VERY wrong in Grenton - and only your group can see the change! The townsfolk are acting completely wrong, guards are everywhere, slavery has taken root, war with nearby Hillendale is imminent, and even the gods are not what they were yesterday. You must navigate the almost-familiar city, discover the dark power that has twisted Grenton, and find a way to counter it, before it's too late! A low-level D&D adventure - all you need are dice and your imagination.

The House of Secrets

Fleeing for their lives, the characters climb into the mountains to evade their pursuers. There they find a villa, a surprising bit of civilization in the wild mountains. It offers safety, but it is also cloaked in mystery. They might rest there, but can they ever leave?