[But first a little aside as to what's going on since it's been a little over a year since last post. Gotta admit I got more interested in playing games than in writing about them. When I blog, I kind of feel oblogated to post regular like. And while I didn't run out of things to say. I did run out of enough things I felt were **worth** saying.  Esp. things that every other blogger wasn't already saying. But I haven't read any other blogs in a while so, ...]

Potential player recently asked me "What my philosophy of D&D was?"

My grumpy old grognard immediate thought as to a response was "To play! Not twaddle on about philosophy." But, I de-curmudgeoned, remembering there are many play styles (more than one of which I enjoy) and this poor soul was trying to get a sense if our presumptions were congruent before spending a Saturday evening playing make believe with our gang.

Wanting to still be vague and open to later DM interpretation while providing some sort of guidance I well reasoned (i.e. first thing that came to mind that didn't suck) was

"Roll the dice, the rest will sort it self out." 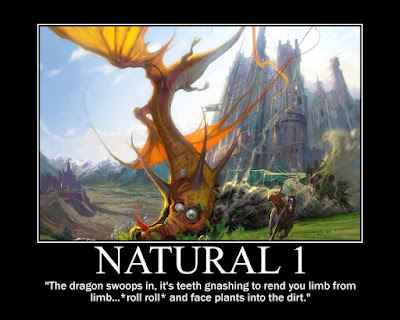