Critical hits have one of two effects chosen by the player. 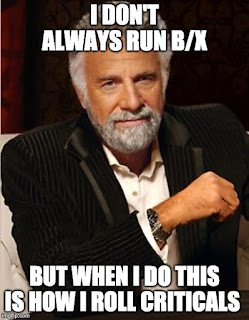 The main types of things I disallow are boring "dealing more damage" ones. Pick the first option to be boring. [I purposely made the damage option not super great, like 2x damage. Because I want players to pick option 2. I want them to entertain me with their creativity. I run games primarily to experience the ridiculous shenanigans players get up to.]

Magic weapons do something "special" on critical hits. [An idea from EverQuest "procing" weapon effects].  I always give magic weapons some Boogie-Woogie. Like "the dagger's blade appears to be an icicle, although steel hard and sharp. When wielded your breath appears as on a frigid morning." Or maybe just a name "Hammer of Dissolution".
I'll then use that "flavor" to enhance the critical chosen by player. Very situational, sometimes over the top [crits should be "WOW" moments]. But, scaled to the "drama of the moment".  So, a max damage crit with hammer against wandering monster, will moleculary dissolve it regardless of actual hit points remaining.  But against Lareth the Beautiful during the final struggle against Chaos a critical blow from that hammer would be epic. [Which I finding hard to "wing" an example of in the absence of actual game play. But, would probably be "stop the evil plot/win the day" type thing].

Major and or interesting monsters; Orc bosses, champions and torturers, but probably not orc "fodder".  Possibly a rat swarm. Certainly all the mythical, magical beasts, and EHPs wielding spears of utter chaos. They all have a thematic "special effect" when they critically hit. I often have idea of what ahead of time but typically come up with something better during play.
Grizzly Bear gets it bear hug or maybe caves in breast plate, the wearer can no longer breath until removed.
Orc Boss savage attack inspire's his tribe they all recover some hp and immune to moral checks.
Orc Torturer whip's blister beetle ichor filled barbs rake your skin. Writhe in agony for next d6 rounds.

Basically all the stuff in books, movies and video games that isn't well represented by rolling d6 damage...