I read, but not voraciously as it seems most gamers do. Maybe four novels a year, probably all in one week when the mood hits me. I blame my lack of novel consumption due to spending so much brain power (20+hours/week) reading blogs, forums, magazines, modules, and game rules. In fact I know the characters/settings/plots of several book series from reading their RPGs without ever cracking open the actual books.

Moving pictures, film/video, have always been the more inspirational medium for me. I forget books within a week. Pictures and video stay with me a lifetime, just how my brain works. I don't remember much of The Hobbit, but I still remember the book cover, the party floating down a river in barrels which I believe was their escape method from the elves of Mirkwood? Visuals fire my imagination and audibles get me pumped up and motivated to create. Music especially, I'm a sucker for awesome musical scores. Everyone of my top movies has stirring music; 2010, Conan, Good/Bad/Ugly, BladeRunner. I've talked about movies a couple times round here. Recently read a couple things about the net which prompted me to broach the subject again. [and in the future a couple posts on things from Hulu.com you can and should watch right now] 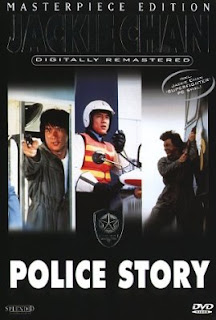 First up The Evil DM recommends, The Forbidden Kingdom in his Cool Gamer Movie Alert (is that "cool gamer, movie alert" or "cool, gamer movie, alert" I wonder?). If Jet Li & Jackie Chan aren't enough to get you on to Netflix, down to rental shop, or in to the torrents then you obviously haven't watched enough Hong Kong Action Cinema and I cry for you. Don't wanna get into it right now but even if you think you hate this stuff at least watch Drunken Master ('78 Jackie Chan), Police Story ('85 Jackie Chan), A Better Tomorrow ('86 Chow Yun-Fat), Once Upon a Time in China ('91 Jet Li) Which I consider the minimal representative sampling of styles (excepting "goofball" & "romatic"), periods, and actors the massive and awesome output of Hong Kong studio's Golden Age. 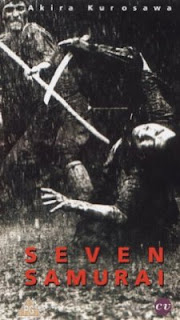 Japanese Cinema. I'm not nearly as versed in this genre as I wish. So, feel free to school me in the comments. On the other hand we all know this genre more than we realize. Seen A Fistful of Dollars '64, The Magnificent Seven '60, Star Wars Episode IV: A New Hope '77, or a heap of newer films I can't be arsed to watch and link to then you've already seen remakes of the greatest modern Japanese story teller, Akira Kurosawa. Dozens and dozens of films, TV series, books, comics are based, influenced, or straight up rip-offs of Kurosawa movies. His plots are timeless. His characters, larger than life yet sincere, believable, and (most importantly) recognizable within ourselves. If you have any interest in Role-playing you owe yourself to study Kurosawa. The minimal (gamer focused) Kurosawa includes Rashomon '51, Seven Samurai '54, Yojimbo '61, Ran '85. Once those get you hooked keep on truckin with Old School Reviews.

Looks like every western you ever saw, eh?
A couple less obvious Akira choices:

Dersu Uzala '75. Based on the 1923 memoir Russian explorer Vladimir Arsenyev is all about the "barbarian" vs the "civilized" and which one is really better. Great fodder for any campaign focused on the edge between frontier and civilization. Either literally or figuratively Which is pretty much all of them from sandbox OD&D to everything written by White Wolf.

Ikiru '52. Not sure if this has any to do with gaming. It's just a powerfully impacting film. Beautiful and moving. Teaching one of life's important lessons. Something I recommend everyone watch. 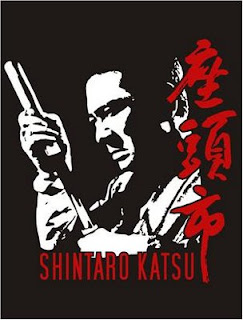 Zatoichi, the blind swordsman has got to be (judging by the 26+films, 112 TV shows, and even a modern movie Zatoichi '03 for youngins who can't stand b/w) one of Japans most popular heroes. I've watched a couple score of these. They are first and foremost thrilling action films. Zatoichi get's in to all sorts of pulpish, swashbucklery shenanigans. Using the environment, enemies and his mastery of sword cane to prevail. Zatoichi is a homeless wanderer, borderline criminal, civilized outcast, and dogooder mercenary. That describes most player characters I've known, 'cept the dogooder part 1/2 the time :). Each show contains a perfect plot hook for adventure. With further details on NPC's, encounter locations, and obstacles to party's, I mean Zatoichi's, success. Even the titles of the episodes are cool. Great material here on top of being freakin awesome to watch.

Japanese Weird. Warning if CARCOSA bothered you stay the fuck away from these films, CARCOSA is Saturday morning kids programming to the Japanese. 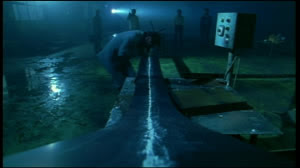 Takashi Miike is a more modern Japanese director (and actor). By "modern" I mean subject matter which is mostly modern setting yakuza or gajin in Japan, black sense of humor, extreme violence, sexual perversion and pushing the boundaries of censorship. Although, true to Japanese weirdness he also makes tame kids cartoons and less extreme adult fare. Such as Sukiyaki Western: Django '07 which is weird cool. A stylized riff of Kurosawa's Yojimbo that reminds me of Cowboy Bebop meets Serenity meets WTF? The kind of thing I'd expect Jeff Rients to run as an Encounter Critical adventure. Dead or Alive '99, a seemingly normal (relatively, this is Miike) cop & yakuza flick with bits of the ol' ultraviolence. It starts with the best coke snort scene ever (that's what's on the ramp in pic above) and ends totally, awesomely over the top. Brilliant, not for everybody. 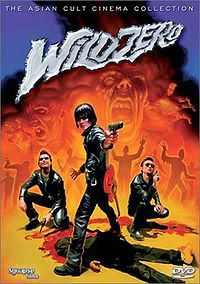 Tetsuo: The Iron Man '89 isn't for everyone, either. It's "cult" with all the loaded meaning that has for you. But it was my first "Japanese" film. A "holy crap, what the fuck was that and were can I get more?" kind of moment for me.

Rounding out the weird Japanese category and ending this post with rock'n'roll, motorcyles, leather jackets and transsexuals (weird Japanese, remember?) is punk band Guitar Wolf staring as themselves in Wild Zero '00. Ripping from WikiP which is astonishing erudite in it's description. This is a zombie horror comedy in which crazy rock managers in very tight shorts, loud over-modulated music, laser guitar picks, motorcycles, guns, muscle cars, and fire abound. It is also a love story.