I've decided to take at least one element from every RPG product I own to use in my Gold & Glory campaign. Starting with my CD collection of the Dragon Magazines issues 1-250. See also DragonDex.

WARNING pixie sized nipples below (if that sort of thing bothers whoever you work for). Even more nipples further below!

Let There Be A Method To Your Madness
by Richard Gilbert

Nice article on dungeon design which was more interesting than title led me to believe. Start with "story" behind dungeon and then enumerate the basic purpose and theme for each level. Interestingly he suggests creating all the connections between levels and only after that is done fill in the rooms of each level. Some basic stuffs, create vertical elevation for "continuity between levels". But also tidbits like

Give the builder’s character a few personal tendencies, such as being sneaky, grandiose, austere, or a hater of straight lines

In the entire history of mankind, only shelter has caused more construction than religion.

Instead of receiving xp for gaining treasure, players receive xp only as treasure is spent. GP Spent / Character Level = XP.

Sacrifices 1/week offering directly to a god, or demon, or to their mundane representatives. Naw, I want sacrifices collected in person or not at all! GP/100 == chance sacrifice is accepted.

Philanthropy aid to the "little people". A real need must exist.

Research wow article says 250gp / level per day! I'd keep it line with carousing d6*100 / session (higher dice with in big city or with nice lab). Money for spell research counts? Making items, potions, etc does not. I can see some reason in that.

Clan Hoards dwarves and other clannish folk. Give it up for the family. 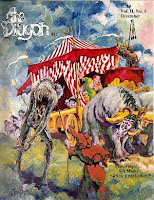 Didn't take long for Dragon to start pandering to puerile interests with pixie nipples last issue and "full bodied" nipples on this freaky cover by Elrohir.

TSR Periodicals becomes a two man crew as Joe Orlowski joins as Little Wars editor. The Monster Manual had been recently released and "Gary continues to work upon this humoungus project daily..." Project being AD&D.


Good intentions never last
"TSR is proud that it did not take advantage of this tendency in its D&D players by sending forth a stream of junk products to attract more money." -- E. Gary Gygax


Seal of The Imperium
by M.A.R. Barker

It requires much preparation, special training, and ascetic dedication to the art to produce a magical scroll. ...a priest might enroll himself-herself with one of the scroll masters. It then takes a year or two to learn: the making of special paper and ink, the ceremonies connected with the production of a scroll, instruction in the secret forms of calligraphy and writing which make it efficacious, the purification of the writer so that his own imperfections do not creep through into the scroll, etc. It then takes a few years more to master the art of writing higher and higher level scrolls. Really powerful scrolls may take a year in themselves to write and are done by a team of priests.
...at least so Lord Fereshma’a hiKúrodu, High Priest of Ksárul in Jakálla, confided to me.

Dig it. Magic! Not just a game mechanic so you have more than a few spells to cast. A scroll. Neat how Barker is playing that his information on Tekumel was releated to him by denizens of that world. Very Edgar Rice Burroughs/John Carter of Mars and many others who copied that style of narration.

I just read my very first Leiber! How sad is that? 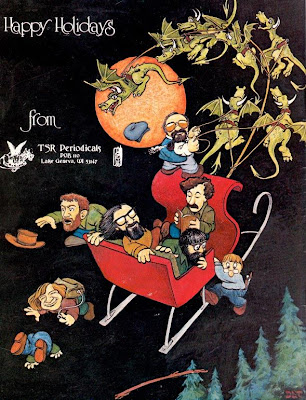 Email ThisBlogThis!Share to TwitterShare to FacebookShare to Pinterest
Tags: Dragon, houserules, One of Everything, rpg