I've decided to take at least one element from every RPG product I own to use in my Gold & Glory campaign. Starting with my CD collection of the Dragon Magazines issues 1-250. 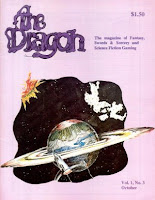 The Full Index. Reading Tim Kask's Dragon Rumbles editorial pages of these early Dragons I'm struck with how much the tone and topics remind me of Ignatius �mlaut's words from Fight On!

From Len Lakofka's Notes on Women & Magic the level name for clerics after Prioress and before Matriarch is Superioress. That's too funny.

GenCon IX D&D Elimination Tournament "Miss Teenage Wisconsin, Jennifer Johnson, was on hand to add a touch of class to the ceremonies and presented all of the plaques." Wonder how that went?

Pretty neat. Interesting ideas on rolling father's title, Knight, Baron, etc. and also their position Land Holder, Sheriff, Advisor to the King, etc. If I used something like this I'd start with the over the top HackMaster system and add some ideas from here to that.


Samurai
by Mike Childers as modified by Keff Kay

The mechanics for Katana and Wakizashi are interesting. They come in +0 to +3 tohit/dam varieties. Each having increasing chance to score a critical. E.g. for the +3; automatic on 18,19,20 or when rolling 5 or more above required to hit number. A critical blow is resolved on this d100 table.

I wonder when the Vorpal Sword was first mentioned and same for critical hits?


A New View of Dwarves
by Larry Smith

There's more of the "if stat then foo" entries. Interesting idea on how to both provide benefit for high stats and produce some character background.


The Berserker
by John Pickens

"Each berserker must become a shieldbrother in one of the following
clans: Wererat, Werewolf, Wereboar, Weretiger, and Werebear. When
the berserker earns his wereshape he will take that form when berserk,"

Kind of a fighter druid shape changer, I'm diggin it. I always thought barbarian and rage were two tastes that did not go well together. Definitely will use this class concept if not the exact mechanics. I like how one of the followers they attract will be a bard (I imagine Skald type)

Under chance of berserking:
Add 20% if the berserker bites his shield (voluntary). 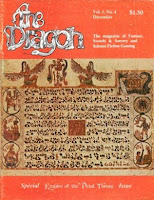 I'm six this month! Full Index. Cover by M. A. R. Barker. The art and that it was made by the game author both pretty much explain why EPT rocks. They added four pages to this issue for EPT.

"In terms of development of detail, I think EPT has it over Middle Earth in the matters that most concern gamers. This is attributable to the fact that EPT was developed by a wargamer, and M-E was not." -- Tim Kask

I hadn't realized EPT was ever so gamer mainstream. Even had miniatures made for it (reviews in this issue). I wonder why it did not take off. Actually I know, it's too freaky. And only some gamers are freak lovers. Some of that freakish awesomeness

"...dispatches from all over the Empire are gathered each month into another volume of the “Korunkoi hiGar-dasisayal Koluman hiTirikeludalidalisa” (The Book of Mighty Imperial Deeds of the Great and Glorious Petal Throne). Inscribed on leaves of gold, this record is maintained in the Hall of Blue Illumination ..."

From Reports Submitted to the Petal Throne. Also very awesome is The Battle of the Temple of Chanis: 2020 A.S.

One of the past / lost / destroyed empires that once ruled the lands that comprise the "G&G play area" and whose ruins are it's adventure sites will be EPTesque. I'll sprinkle those reports and the rest of the awesome flowery text in scrolls, texts, monument carvings. Perhaps the players can piece together the location of a great treasure. Or even what caused the Empire of the Petal Throne to fall and thus avoid its mistakes. 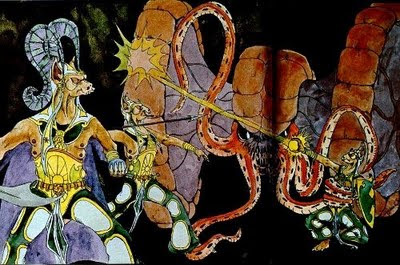 Your basic malevolent ancient race, but with awesome pants.

The Mihalli are an ancient nonhuman race which came with humanity to G&G — but not with humanity’s knowledge or blessings! Their motives and attitudes are totally incomprehensible to mankind. They behave in ways which can only appear random to humans, since the Mihalli seems to function simultaneously in this dimension and in others as well.

The Mihalli are humanoid in form, hermaphroditic, able to see in the dark. Their skins range from dull green to a rich coppery brown — lower class Mihalli being of the former color and higher level Mihalli of the latter. They are shape-changers and can adopt the form of any human they wish. The only drawback to this is that their opalescent red eyes can at times (20% each turn looked at) be seen even through their disguises. They are marvelous magic users.

Their favorite magical weapon is the Ball of Immediate Eventuation, which can fire an energy bolt, build up a defense shield against all nonmagical projectiles, or cause them to become invisible. This weapon comes in various strengths, represented by its color: the weakest one is light purple, then bright silver, then bright gold, then lambent, translucent blue.

Email ThisBlogThis!Share to TwitterShare to FacebookShare to Pinterest
Tags: Dragon, ept, monster, One of Everything, rpg