Philotomy's OD&D Musings (Internet Archive link, original site is down) on The Dungeon as a Mythic Underworld I believe was penned to provide a rational for the irrational old-school megadungeon (and to point out that megadungeons are more than just a holes in the ground (and to reintroduce the fantastical which has been misplaced with the systematization of RPGs)). For me it was a spiritual revelation. In that I believe it to represent the spirit of D&D (or at least the D&D I want to play). A game of Fantasy and Imagination.

Since first reading Philotomy and a few related forum threads / posts I've imagined a corollary, The Mythic Wilderness. I've struggled to get the words together and I doubt I've done it justice. But, perhaps by following Philotomy's lead a glimmer of the awesome I feel for it will shine through. 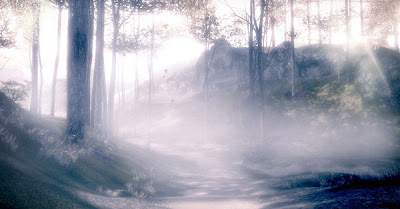 Most people stay close to home not because they are bound to the land or haven't the means to leave, but primarily, because they know home. Their village, surrounding fields and grazing meadows seem safe, at least during the day. Beyond those the land is wild. Who knows what may lurk there? People enter the woods and never return, gobbled up by goblins most likely. Wilderness is the fear of the unknown, manifest, waiting to pounce on those who stray near.

The wilderness is strange and foreboding. Full of husband seducing nymphs, witches that eat children, and fickle fey as likely to charm as curse. (or Jale men and cthulonic horrors, or spider goats and berserk robots, or ...) As for geography and ecology, the wilderness should have a certain amount of verisimilitude, but it is a wilderness: a place where the normal laws of reality give way to the supernatural. The same path does not always lead to the same destination. Time, distance, and season are as variable as a pixie's mood. A great Wyrm may prowl woods in which there is not enough for it to eat.

The wilderness is not merely rolling hills and woods speckled with lairs and random encounters, it is mythic wilderness. Fantastic, bewildering, separate and sinister. It is inimical to civilization and its sons; the wilderness, itself, opposes and obstructs those brave souls compelled to explore it.

Characteristics and philosophies of the mythic wilderness: