In honor of International Traditional Gaming Week I ran my "B2 Caves of Chaos" for some of the local D&D Meetup crew this past Sunday.  Using Labyrinth Lord rules [house rules in effect; Order of d30, damage by class with more damage if you forgo shield and use a 2h and +1 to hit if you dual wield, death and dismemberment, sleep regains hitdice "don't get" hit points e.g. 3rd lvl fg regains 3d8]. 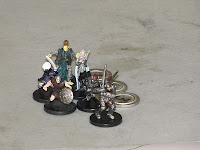 Sparkles and the Dwarf went in on a trio of men-at-arms whose employment did not work out to the satisfaction of anyone involved. (they failed moral when seeing ogre in first encounter of the game, Sparkles (did I mention he was Chaotic?) felt they should return their days pay for such cowardliness.  A feeling he expressed with no small number of threats. Spock, McCoy, and Kirk (the m-a-as) left on less than amicable terms.) 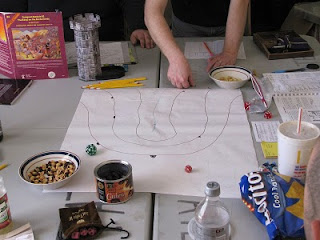 This was my first time DMing LL, and the first time (that I remember) DMing B2.  I felt rough but this group rocked out.


First encounter party attacks rather than parlays with the molemen (nee goblins) trigging the later to payoff Ogre to come squash intruders.  I thought "yay, TPK!" But was denied when they scared away Ogre's molemen support. Clearing way to encircle Ogre while it was being distracted with bribes. Scratch one Ogre.  The molemen fearing these powerful new killers offered them tribute.  Which party deftly parlayed into installing themselves as the new "Ogre" and extracting a great deal of good intel on the caves while feasting with the moleman king. Intel they put to smart use.

Next they go to town and spend all their ill-gotten loot on better armor, potions and a couple of war dogs, "Gwar" and "Fluffy". Which, back at the caves, they use to lead charge into the "blue line" orc cave.  Quickly slaughtering 4 piggies in first guard room, then 4 more in second guard room.  Then wisely withdrawing as the orc lair "awakes" and a large force of pig men assemble to deal with the interlopers. On the way out they yell insults and claim the slaughter to be paid for by the "red triangle" aka orcs from next cave over.

[Aside on "orcs": Properly called pig men and derogatorily as porkers. Which common folk shortened to 'orkers, then ork, which eventually got misspelled as orc. Bam! Pig-faced for a reason.]

Of course party bee lines for the "red triangle's" cave with fresh "blue line" bolt they pull from Shitpant's chest for incrimination with goal of inter-tribal war.  Well long story short, Sparkles Charm spell works this time and on the "red triangles" chieftan. Being an orc chieftan it was not hard to convince him of "blue line" treachery, the need for revenge and to whip him into a frenzy.  He declares  a "war party" and some 20 red triangle orcs with players close behind head over to to teach the blue lines a lesson.  Well big battle later only a few orcs and one porker chieftan remain alive.  Of course, that is when Chuck drinks a potion of heroism and shortly thereafter no orcs and zero chieftans have survived  Player character duplicity at it's finest.

BTW I awarded xp for all dead orcs no matter if characters killed them or not.  To my mind characters were directly responsible for their "defeat".  Besides if successfully enacting the "Fist Full of Dollars" plot ain't worth xp then xp ain't worth having! 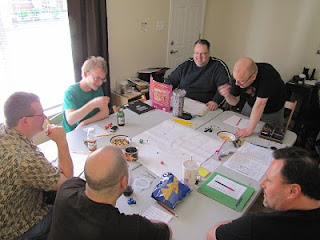 [Aside on big battle: It is boring to watch DM roll hits and record damage for 50 orcs/I really didn't want to run big battle.  Instead, I rolled 1d6 for each tribe low roll (blue lines) lost the initial melee at cave mouth.  Many of the pursuing red triangles broke off to pillage (storage room and common room full or pig women was next locations on map, seemed like the orc thing to do). I ask players if they want to pillage, find orcs to kill, follow chieftain and guard who are still charging through cave, or something else? They choose to follow chief whom they correctly surmise is hot to put an axe in the opposing chief.  I narrate a bit of chief-n-guards hacking down doors and dealing with blue line bodyguards.  This ends at "climatic" scene of red chief (his guard stripped away/replaced by characters) vs blue chief, his mate & child (which the players mercilessly slaughter before his eyes) and a few remaining blue orc guards.  Which we play out as normal combat.

So, big battle into small battle, the important one. While broad brush stroking the lessor battles. It worked well and I liked it. The key was giving the players choices. If they just wanted to grab some loot and run then the chief battle would have occurred off stage "in my mind" (and only if I needed to know what's up with orcs/local power structure cause characters were returning to caves of chaos).

If the players aren't involved it doesn't need to be determined in detail. Simple d6 vs d6 (maybe with a modifier if one side has advantage, is more numerous, etc) is all you need.] 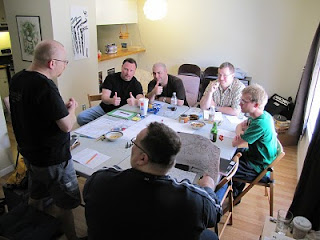 All in all an excellent prep for my upcoming Twelve Hour B2 Caves of Chaos Marathon on April 3rd at FLGS Dragon's Lair in Austin, TX.