Been looking into magic systems recently. Wanting to blend in some weirder, pulpier, less balanced/mainstreamed/commercialized chaos from before my time. I never had any Arduin stuff back in the day. But, noticed it being mentioned a bit 'round the blogs. So, I checked it out...

Dude. Seriously, dude? David Hargrave was insane (positive meaning) and is the epitome of punk; diy, raw, hard-core, frenetic, in-your-face, stickin it to the man. I totally dig his chaotic, mishmash of creativity. You may not, that's fine, but it shouldn't hinder your recognition of his intrinsic awesomeness. I hold the "Dutch Masters" to be dudes of the highest calibre even though I can't stand their paintings. I'm not talking about his mechanics, which probably suck. (Although, the Special Abilities Charts look cool) I'm talking about his awesome! The Hell Spirals or Tokkrang's Star Bore or gaggle of Prismatic Walls or section on Orc Alchemy or just the fact that Arduin has a Dinosaur Chart!

David Hargrave totally deserves more credit and respect. I've hardly heard of him. Relative to the hobby's other great founders, hardly anyone mentions him.

I can tell he pushed then for what gaming should be today and always; hobbyist, diy, for and by the little guy, done for love. There is no better motto/goal the OSR could adopt than this statement written by David Hargrave in the forward of his first publication.

Holy cow, were was that during the 4th Wars of Edition? For which I'm guilty as the next guy. If only Hargrave was around to knock the stupid out of us. For me, more than any particular rule set or method of playing, that attitude is what "old-school" means.


***
David Hargrave died before I was 18. I'm trying to learn about the man. Grognardia, my usual source for RPG early history, has more or less ignored him. His wikipedia article is way too short. I'm currently reading his "The Arduin Grimoire Vol 1" where I found this.


Special Note: the artwork for this supplement is the sole doing of one fine young artist: Errol Otus. I'm only glad I'll be able to say ten years from now, "I knew him when..."

Man, dude, I wish I could say that about you. 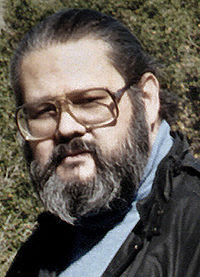