See Born of Stone and Wood for background.

The Fallen Alvar(Fey). Long ago turned their backs on the Mythic World and their Alvar brethren. They embraced The Mundane, plowed the meadows, built cities, learned science and technology. In a word they civilized and the Alvar have not forgiven them. 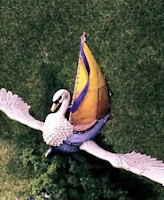 Elves form large family clans. Most of which have banded together into several "city-states". Elves are fiercely loyal to their clan and city-state. Competition, raiding and out right war is common between the city-states. Elves are known for their exploration and colonizations. One may find elven lodges anywhere. Prows of their swan ships on the horizon presage either a violent and merciless raid or a profitable trade meet.

Most elves follow the Asgardian pantheon. Esp Baldur, Thor, Sif and their children. But various colonies and individual elf groups have adopted most other pantheons at one time or another.

4.5'-5.5' tall, slender build. Graceful and beautiful by most races' standards.