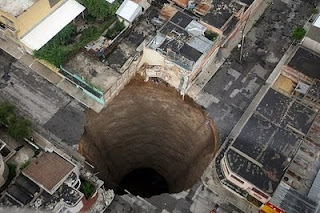 The recent (although I swore I saw this photo long ago*) big hole in Guatemala and Purple Worm Post got me a thinking.

I'm partial to huge fantasy cities.  Places like Ptolus, Alexandria or Constantinople analogs, CSIO, and the like.  Lots of adventure, weirdness, and debauchery to be had. It's a nice change of pace/action from being way off on the edge of civilization in some po'dunk Keep on the Borderlands.

But, eventually I get the hankering for some down and dirty megadungeon exploration and monstrous beasts.  I've never been able to  the idea of mad wizards castle/dungeon just outside of town, or "it's catacombs and forgotten dungeons all the way down" and all these fantastic monsters have had absolutely no impact on the city full of tasty civilians but 1st level characters can come and go as they please, or other even lamer "dungeon next door to city" hand-waves.


This one is no less arbitrary but some how I like it better.

50' wide Purple worm bursts through surface, rampages, kills thousands, devastates an entire district of the city, takes days to kill, an epic battle that claimed many of the region's greatest heroes.  Now, weeks later, initial exploration has revealed extensive tunnels deep withing the gapping hole left by the worm.   Authorities are calling for new heroes to step forward and explore these depths.  To determine if more of these purple monsters or worse threaten the city.