Been sick and there's so much to be blogging about; NTRPGCon discussion panels, Free RPG Day, games played, new Arduin, e-bay, and NTRPGCon loot, ... 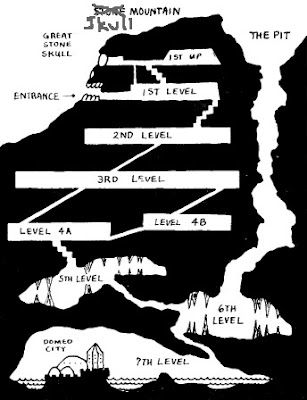 This elevation was formative.  There's been a Skull Mountain in
every campaign I've made since seeing this sometime in the 80's.

My boss has been interested in playing some D&D with his two boys (10-12 age range).  He's asked me various questions about running games and the like. [It's very enlightening and refreshing talking with an "empty mind".  To him it's just D&D, full stop. Not a jillion of editions, old/new school, sandbox/storypath, etc/deadhorse.]  I purposefully was not edition evangelizing (Although, I was totally evangelizing RPGing in general.  Mentioning the several bloggers posting about great times gaming with their families).  A couple weeks ago his kids cornered him and got him to run an encounter with the 4ed (intro set?) they had.  The Joy of Play was experienced by everyone.  But it was a short session and all involved craved more!

I've endlessly encouraged him to go to an Austin's D&D Meetup [Which are great, btw. If there's a meetup in your area you need to go to it, if there's not you need to start one.]  I warned him that it might be a bit confusing to play a different version of D&D.  But, I fear that my raving about how much flippin fun NTRPGCon has been might have unduly influenced him.  Cause last weekend when they finally made it to the June 13th D&D Meetup they rolled up Swords & Wizardry characters and entered the Dungeon of Skull Mountain DM'd by Jimm Johnson also known as The Contemptible Cube of Quazar. [love that banner art]

My boss and his sons had a blast.  He's been talking about it all week.  Has downloaded and printed S&W manual, monster collection, character sheets, and asked me for intro modules. [I struggled to find S&W specific, free, intro modules, wtf?  I gave him B1 and a copy of OD&Dities #12 which had "Ruins of Castle Vendegaar" by Robert Adkins. Thanks Robert!]  He wants to play D&D on long road trip. I told him friends don't let friends DM and drive.

Any suggestions for him?

I was kind of bummed Jimm ran his game when I was running something and couldn't join in the fun.  But, I believe he'll be running Skull Mountain as a continuing "campaign", booh yah!  So, all you Austin area old-schoolers (and I know there's a few of you) that haven't been coming to D&D meetups thinking it's all 4ed.  You're on notice.  Kick those kids off your lawn early so you have time to attend the Austin D&D Meetup.  There's now a S&W ongoing game, several 1st / 2ed ongoing games, and I'll run Labyrinth Lord on demand.  We also have space for more DMs, bring it.


SKULL MOUNTAIN
Two days north of the last outpost of the Sparn Empire, through the cannibal haunted jungles of Brool, across the piranha teeming river, a great boulder-strewn crag rises from the mists. An enormous, leering reptile skull sits atop the rugged formation. Some say the skull is an odd natural formation, while others insist it is the petrified remains of some primordial unhuman god. Whatever its origins, the whispered tales of Skull Mountain all agree on one thing: incredible treasure and unmatched glory await those bold and foolish enough to penetrate the mountain, unravel its dark secrets, and brave its untold dangers. Of course such treasure and glory will only accrue to those who can return alive!

This is an OD&D/Swords & Wizardry scenario for low-level characters and beginning or experienced players. Characters will be created at the table before play begins.  [damn straight!]