[mwschmeer has been collecting these "Sithogy" posts into a Google Doc, cause he's awesome like that. This was an (optional) side adventure in my semi-weekly Temple of Elemental Evil OSRIC Campaign. The party raided the mound, successfully capturing Sithogy's Boa for a witch (they should not have been doing favors for). Later; (at avg 3rd level!) the party, various local personalities, most of Nulb the pirate town's residents, a couple pirate ships, and the HMS Resource returned to slay the dragon and loot its hoard. Things didn't work out exactly as planned ;)] 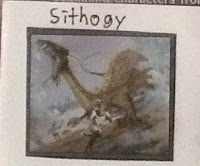 His true lair is deep underwater and unlikely to be penetrated. If cornered he's not that tough on paper. Played right, he should never be cornered. Sithogy is very smart, extremely cunning, selfishly evil and cowardly. He has survived for more than 350 years. Aided by spells and allies he employs traps, deception, misdirection, hit-and-run assaults, and "let's you and him fight" tactics. He regularly trades intelligence with Air Temple Priests, Screng the Witch of Nulb, a Sea Hag (before party killed it), and various swamp creatures (via spells). He will be aware of any threats to him in the region.  And many in this evil area are very willing to get on his good side by doing him a favor such as dealing with PCs who become too interested in dragons.

Sithogy's abode is a large, muddy mound of an island at the center of a mile wide lake he has dredged from the swamp far NE of Nulb. Numerous holes potmark its surface. Seventeen of which Sithogy has dug out into long twisting tunnels. These tunnels are roundish, muddy, slippery, and filled with roots, twists, and steep elevation changes. Nine of the holes lead to one of Sithogy's three pets (below). The other eight pass right through the mound. This "maze" should confuse and (ideally) provide food for his pets. Causing intruders to waste time futilely searching for the "one tunnel" leading to Sithogy's lair. Delaying them long enough for Sithogy to wake up and take notice.

(roll once per tunnel or as desired)

Gaggle of Giant Leeches suck it up here abouts.

Fun times. Fungamoth: 8HD, 7AC, only +5 to-hit, d4/d4/2d6, starts off bruise blue. In addition to tentacle touches and mouth bite it does one of the following every round:

4, 5, 6 (and 2d6 bite attack) require a mouth. The Fungamoth has two of these at the ends of long "stalks". Looking very much like they can be cut off with a lucky or targeted slice.

In the center of the air shrine a 10' dia shaft descends into darkness. Reminiscent of air shaft in ToEE a narrow staircase winds around its edge. The air temple is very weak and has few resources to spare for recruiting Sithogy despite it being their best gambit. Along the shaft are a few rooms containing four Air Temple Hobgoblins, Two Air Temple Priests (2nd, 3rd level) and several Steam and Smoke Mephits (likely encountered in the shaft itself). Very little treasure. It is all given to / demanded by Sithogy.

There is 2 in 6 chance of Kelno, Air EHP, being present as well. Busily attempting to bribe / convince Sithogy to commit to the Air Temple. Something Sithogy will not do for as long as he can milk Kelno. In fact, he's currently attempting to reach out to other Elemental factions (something party could help with) hoping they will ply him with bribes as well. ;Or, at least / eventually pay for Kelno's head.

This large (big enough for Sithogy to fly around) cavern is two-thirds filled with a swampy lake. The other third being boot sucking mud and quicksand filled swampy land. The roof is pierced by The Shaft. ;Its stair terminating in a metal catwalk 50' above the water. Numerous casks of oil are concealed throughout the cavern. Sithogy uses these in conjunction with Unseen Servant and Affect Normal Fires to "welcome" invaders who penetrate this far.


There is small chance of encountering guests (Air Priests, Screng, other CE personalities) awaiting an audience or being entertained by Sithogy.  No other encounters will occur. Sithogy eats or scares away everything else.


After much searching deep in the murky lake (requires water breathing) one of two tunnels may be located. One leads 100's of feet to outer lake. If discovered and every year regardless Sithogy redigs this, his main, entrance tunnel. The other tunnel leads to Sithogy's Cave. The silt filled water in these tunnels and Sithogy's Cave have but 1' visibility.

Deep underground past a long, dark, twisty, muddy water filled passage lies Sithogy's water filled cave. He maintains a small pocket of air for his scrolls and other treasures that would otherwise be damaged. The bulk of his hoard is sunk into and piled up on the muddy floor. He enjoys squirming and rollicking through it all.

Even with ability to breath water it would be difficult and very time-consuming to locate all of this.