[After thinkering over the feedback I got in my first Berserker Post I decided to change things up a bit. Below I present the complete GnG Alfar Berserker class for Labyrinth Lord or B/X, BECMI, RC, whatever float your Swanboat. Needs play testing but I think I'm done messing with it before I see how it plays.]

The Fey know them as the Alvar Vekk (Fallen|Low|Lost Fey), men call them Elves, Alfar is the name they themselves use.  Long ago they turned their backs on their Fey cousins and the Mythic World. They embraced The Mundane. Ploughed the meadows, cut the woods and mtns pilling them into cities, learned science and technology. In a word they civilized and the other Fey have never forgiven them.

Elves cluster into large family clans.  Most clans have banded together into city-states.  Elves are fiercely loyal to their clan and city-state.  Competition, raiding and out right war is common between the city-states.  Known for exploration and colonization.  Their lodges and larger colonies may be found anywhere.  Sighting the prows of their flying Swanships on the horizon presages either a violent and merciless raid or a profitable trade meet.

Although various colonies and individual elf groups have adopted most other pantheons at one time or another the majority elves follow the Asgardian pantheon. Espcially Odin+Frigg and children (Tyr, Bragi, Baldur), Thor+Sif, and Loki.  These gods have taught and influenced elves to adopt much of the culture and attitudes of Earth's Norsemen. 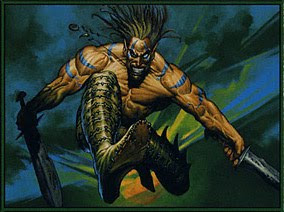 "Berserkers stand and fight because if you run, you'll only die tired."

Must have 13+ in both STR an CON to earn 5% xp bonus.  Must have a CON of 16+ and STR of 13+ to earn 10% xp bonus.  Note: high Wisdom is a detriment for Berserkers making it hard for them to work themselves into and sustain berserkergang.  All Berserkers hold Thor in great esteem for it is his hate and anger that fuels their berserkergang frenzy.  Most are active members of his cult.  If there was any doubt all Berserkers follow the Red ethos*.  A Berserker may earn the right to various titles (wolf, bear, beast, dragon).  To do so they must kill the title's creature and wear it's pelt.

Berserkergang: During combat, whenever they take damage, a Berserker may attempt to work themselves into a berserker rage by rolling 2d6+damage >= their Wisdom score (2 always fail).  Hit point damage received is added as a modifier to the berserker rage roll.  Berserkers may attempt this roll every time they are hit for damage.

Berserkergang lasts until Berserker does not attack (for whatever reason) or Berserker fails to hit at least once in a round and also fails a sustain rage roll, 2d6+lvl >= Wisdom score (2 always fail).  Berseker's level is added as a modifier to the sustain rage roll.

After the berserkergang leaves them, Berserkers are mentally and physically exhausted.  Until they rest (during post combat recovery) Berserkers suffer the following effects.  Cannot work themselves into a berserker rage.  Have a -2 penalty to all activities; to hit, skill rolls, saves including Death & Dismemberment rolls!

Berserker Pelt
Berserker's who kill a wolf, bear, beast, or dragon earn the title wolf|bear|etc-slayer and the right to wear it's pelt.  A Berserker who drenches their pelt in the blood of 99 battles and takes it to 9 places holy to Thor may sacrifice themselves with this pelt.  If Thor is pleased he will return Berserker to Midgard as a shapeshifter able to transform into the creature matching the pelt.

Too many dice rolls?  A couple 2nd ed Kits, Berserker and Battlerager are very similar to my other Berserker Post, including the attacking friends FU.   Compared to Fighters, Berserkers are limited to medium armor, will be benefiting from shields less, do slightly less 2h damage (but 2x when berserk), two prime stats for xp bonus, susceptible to magic, and no ancient tech.  High damage, but likely to burn through hit points.  Maybe a bit like the combat version of magic user, in that they hit hard but quickly blow their wad and need to go home and rest.


Ancient tech -- the air cars, the laser pistols and the other kick-ass stuff are genetically coded to only work for the Ancients (or those possessing enough Ancients' DNA).

"Bloodlust" -- After dropping an opponent in melee, receive free attack on nearby target.