[I'm forgetting order of things and some details. I'm sure I'll get things wrong.  This player report is probably more accurate.  These recaps are more after-action analysis of my DMing, rules, scenario, props used than campaign dairy.] 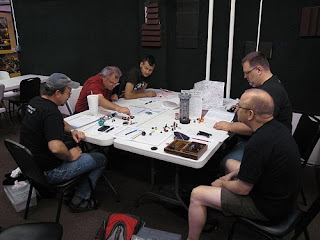 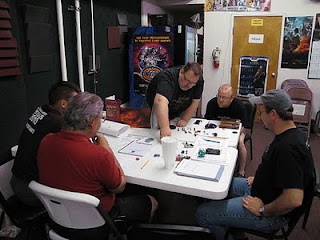 Good Plan Lets Do It Again 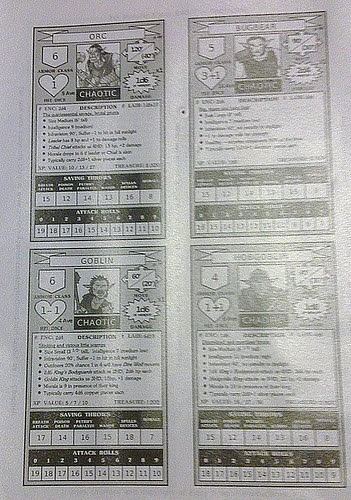 Again party heads to Caves of Chaos.  Again DM rolls a 1 on d6 indicating wilderness encounter.  This time I roll [one roll looked up on two encounter tables] vampire (inhabited) and orcs (mtns).  I go with orcs, cause fuck this marathon is called B2 The Caves of Chaos I don't want to spend 12 hours slaying the party with a vampire.  Looking up orcs on my very freaking handy LL monster cards (Thanks Jonathan Chappell!) which I put into my DM binder instead of cutting up into cards (crappy photo at right). I see that #Encountered is 2d4, I roll 6.  Then I roll Reaction (2d6) got neutral response.  Figuring these orcs came from the "Blue Line", one of two tribes in the Caves of Chaos, and were out here on the road looking for a caravan to raid not a 8-12 member strong band of good guys.  Knowing they'll likely be spotted they send out the red heart on white flag universal "Let us parley" sign.

The party sends up two orc speakers. Pisspants and Starhawk an elf.  Who the orc "negociator" points at and says "Is that suppose to be an insult." Quickly thinking Pisspants looks angrily at elf and says "Stand back 10 feet." "Ah," orc says, "It is your slave, very nice.  We eat ours."  Short negotiations later, both parties agree to let the pass peaceably along with suggestion by Warich, the orc raiders leader, to seek out the "Blue Lines" chieftain, Muback if the party was sincere in their offer to aid the orcs in destroying their enemies. [Not even at the Caves and party is already trying to get the monsters fighting themselves.  BTW if they do this I award XP for monsters killed. Even if characters did not do the actual killing.  To my mind, getting "them" and "them" to fight each other doing your work for you is at least as deserving of reward/XP as risking your own neck.]

The party wanders around Kobolds "Hedge Maze" for awhile mostly remembering to use 10' pole and avoiding the many pit traps.  They find the entrance and a small fight erupts.  But the group shows zero interest in screwing with Kobolds.  Choosing higher risk and more rewards and less flippin pit traps.  And also bringing a tear of joy to the DM's eye for picking up on that "old school" characteristic so quickly.  More wandering and the emerge into the caves proper. I read them Gygax's "boxed" text;


The thick, twisted tree trunks, unnaturally misshapen limbs, writhing roots, clutching and grasping thorns and briars all seem to warn and ward you off, but you have hacked your way through regardless.  Now you have stepped out into a ravine like area.  The dark, streaked rock walls rise rather steeply to either side to a height of about 100' or so.  Clumps of trees grow here and there.  At varying heights on all sides of the ravine, you can see the black mouths of cave like openings.  The sunlight is dim, the air dank, there is an oppressive feeling here.  A flock of ravens rise croaking from the ground, the beat of their wings and their cries magnified by the terrain to sound loud and horrible.

You know that you have certainly discovered the Caves of Chaos. 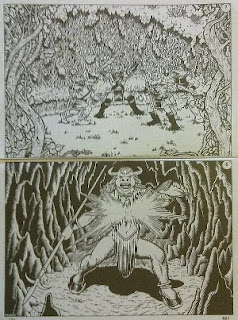 Party makes straight for what they've been told is the "Blue Lines" cave.  Some failed negotiation, crossbow bolt to the chest of Hylas Amazonian men-at-arms, and a wandering monster roll (again!) later group decides, after much deliberation, to "take out" the Owlbear.  [Since negotiations were taking some time and party was hanging out of caves I rolled d6 a '1' indicating some activity related to one of the denizens of the CoC's. I rolled another die and counted cave entrances clockwise landing on the Great Horned Owlbear's cave.  And that is how we got to what happened next.]

Party makes a fairly reasonable plan to kill the Owlbear with dogs and ranged weapons.  Being the single most feared creature I figured it was "smart" enough to have not fallen for standard tactics like that. Rather than become a pin-cushion it used forest and other covering terrain to approach as close as possible to it's dinner.  Emerging from the tree-line 1 round worth of charging away.  Onedias yells, "Wait! Hold fire for one round." and casts charm.  I felt bad having NPC take the "lead" pull out the ace.  But, that is what he'd do and I added him specifically to the party so they would have that ace.  Well one failed save and DM misinterpertation(lack of bothering to look up spell actually) later party has a third "dog".  Just this one has 5hd and 3 attacks.  Onedias yells his second line of the evening, "Now, now my friends we visit our friends the orcs!"


Best marching order for entering orc cave;
charmed Owlbear in front.
Everyone else anywhere that is out of it's way.

Orcs amazingly succeded the several moral checks I subjected them to as the party and Bear Owl slaughtered them.  Owlbear was killing about 1.5 per round but orcs using corridors to their advantage were able to get 4 attacks per round on it.  It got down to 1 orc (who yet again made is moral check, a 3 I think) and owlbear with 3 hitpoints.  That guy was gonna be a famous orc hero. It's porcine bust carved in marble or cast in bronze, sitting on the mantles of upper caste orcs from the Grimlok Sea to the Mushy Marshes.  Instead bear owl rolled it's to hit first and started munching on tasty orc.  That is when Magnus Priest of healing and metal (not good kind of metal) decided she had better finish owlbear off rather than risk charm breaking.  Since target was unawares and distracted I let her roll damage (automatic hit). She luckily rolled more than 3.  Would have been great time to roll on Death and Dismemberment table for owlbear.  But, alas, I had already decided that was not for monsters.

Some playing hide and seek with a Otyugh (which I couldn't find in LL, not there? called something else?) and several forays to city to sell orc loot and owlbear eggs/loot and leveling. They decide to take on the baddest, scariest cave there is.


"You find a hidden set of steps carved into the steep ravine.  Starting about 100 yards from the large cave entrance to either side of the path are skulls resting on tall polls.  As you get closer you can tell this is no cave but an entrance lined and faced with large granite blocks. Into which skulls and necromantic features have been carved. On the whole it appears very tomb or crypt like.  Standing before the entrance you smell the stench of death's decay.  Emanating from the black hole is an oppressive malevolence, weighing you down and testing your resolve."

After that description and near universal men-at-arms moral check failures party decides to try the next cave over.  Minotaur yeah! Onedias (under player control this time) charms the Minotauress and if you read the Hackmaster B2 version of the minotaur lair you you know what a mistake that was.  Much handwaving of details later party rescues Onedias and slays the Minotaur.  After some DM prodding they even locate the secret stash of major loot; Staff of Curing, +2 platemail, potions, and lots of gold.


Some Observations
That I didn't work in elsewhere or need repeating.

Next B2 post will be on the maps I made.