B2 Caves of Chaos Maps

I get free rolls of newsprint from my employer which come in handy for drawing large player maps such as this one depicting the ravine that contains The Caves of Chaos.  I only drew the cave mouths that are immediately visible.  Also depicted is are wooden areas (and tree stumps that the nature destroying orcs left behind, bad orcs!), contour lines, and a stream.  I had hopped that the players would draw (their maps and notes) directly on this map.  Didn't happen much. 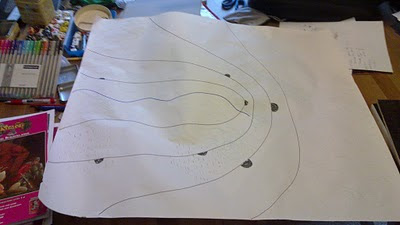 I have no scanner. And I'm done futzing with my camera and ready to move onto something that's not B2 so below small, blurry pics are the best you're gettin, sorry. 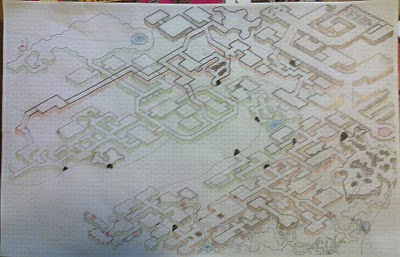 The above is a color copy I made of base map (not pictured) to which I added colored pencil shading.  The shading does accentuate the isometric and multilevelness.  It also looks perty.  Oh, I used three colors of shading, dark brown for top level, reddish brown for mid level and green for low level.  Also the higher up, the darker dungeon walls are (using different pen thickness/colors(grey vs black) and going over walls twice to make them darker).  Another trick to visually separate the various mini-dungeons is to use different "wall styles". The temple used big square blocks.  Warangutang lair used very straight lines.  Molemen and kobolds used wavy lines.  This also served as a reminder as to the composition and quality of construction of each lair.  E.g. wavy meaning dirt, tree roots hanging from ceiling, and the like.

The map is a mixture of D&D B2 and Hackmaster B2 maps. I liked some of the Hackmaster flavor and it was larger, but too large and not easily made isometric.  When combining the two I added many loops, alternate paths, more connections between lairs and levels, and more multilevel lairs.  The original B2's lairs are all fairly small and linear.  Characters have a choice of what what cave to enter but once there it was pretty much hack through a couple dozen minions until you get to the "end boss".  These loops provided tactical options to players and defending critters alike.

B2 also was lacking in traps.  I added a few.  Many from Hackmaster, the Kobolds lair in particular is trap central.  Btw pit traps are fun to draw isometrically, esp if at their bottoms are secret doors leading to the Otyough's cave complex!

I'm somewhat sad neither group got to the Warangutang lair (aka Hackmaster's Hobgoblins).  Warangutang's come from (ack forget which) blogger's mutant future campaign, uplifted by the ancients.  I decided their leader had a laser pistol, handed down through the generations.  They also, from Hackmaster, have funny motivational posters such as:


A tapestry depicts a group of four smiling Hobgoblins hangs on the west wall.  Which has some hobgoblin writing that reads "Sometimes the best solution to morale problems is just to kill all of the unhappy people."

... depicting a Hobgoblin military leader shaking his finger. The text reads "Don't make your death serve as a warning to others."


The hardest things to draw isometrically are caves and octagonal rooms.  I drew 2 drafts prior to getting to the final map.  I still made a couple mistakes, placing a sinkhole in the floor lower catacombs leading to the Minotaur lair some 2-3 levels above. And forgot to draw dashed lines a couple places where a passage was underneath another.  Overall neither a big deal. But makes me wonder how many iterations professional published module maps go through? 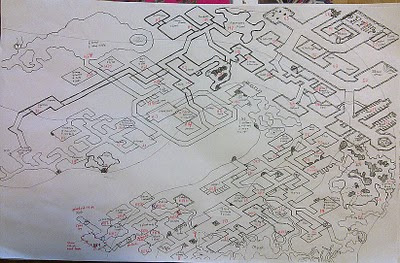 B/W copy of base map(not pictured) used for key and notes.  During a session I might scribble notes on this, deaths, changes to terrain, etc.  Esp if I were running a campaign.  Then create a new one for each session.  One reason I like to keep an original and make copies of it for in game use.

If this dungeon was my own creation it I'd probably not have a key.  Being my own creation much of it would only be in my head and vaguely defined rather than written out.  (A reason I publish very little.)  Rather than separate keys, I prefer to write notes / reminders directly on the map.  You might have noticed a theme of encoding as much information into the map as possible (isometricness, wall styles, trap symbols, drawing room features on map (see temple for example)).

Although, this particular map is a bit dense and too "zoomed out" for that to be very effective.   When more detail is needed I like to use 3x5 cards.  Each "lair" would have one card with encounter table for that lair, any other specific rules / reminders for that lair (5' ceilings, dirt and rough stone construction), and a few "five senses" evocative words / phrases for use in description.  Such as "Bree-yark!", stank of animal, dark, rat squeaking, crickets, moist dirt, tree roots from ceiling.  Then, if necessary, a separate 3x5 for each room/encounter with stats, names, tactics, treasure, boxed text, etc.  Really helps me give each area it's own flavor and feeling and cards with short notes are easier for me to access in game then flipping though book and reading paragraphs.