On Sat, April 3rd, at Dragon's Lair Austin (FLGS), I ran a twelve hour marathon of B2 Caves of Chaos, a mixture of Basic D&D's B2 Keep on the Borderlands and Hackmaster's B2 Little Keep on the Borderlands, using Labyrinth Lord (a BD&D retro-clone) from Goblinoid Games.  I originally planned to run this for TARGA's International Traditional Game Week.  But that was not meant to be. Instead for ITGW I ran a shorter B2 Caves of Chaos for the Austin's D&D Meetup Group. Which turned out to be good marathon prep. As it was my first time using LL and my first non-solo run of B2.

Now that I got every possible plug out of the way... 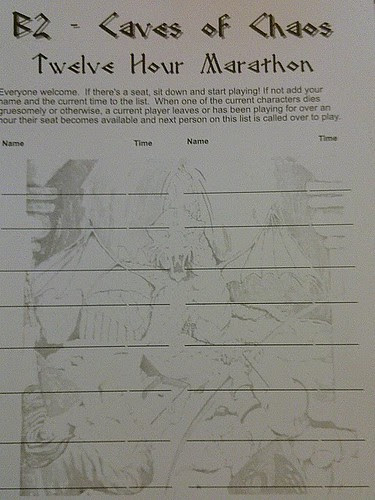 Both times running this I had a blast. Players seemed to have a blast. B2 is just plain damn fun.  And with LL's fast combats you get to experience more of it in same amount of time.  Combined, approx 18hours of game time, the players wiped out (or allied with) every major group except the Warrangutans (aka Hobgobs), The Black Temple (aka Chaos, aka undead central), and the tiny Bugbear lair.  Our results might be skewed as both groups rocked.  Good tactics, avoidance of high risk, low rewards (kobolds and their "Hey what's that? Bet we could trap it!" attitude), and the like.

Charm, esp when misinterpreted by DM to work on Owlbears and Minotaurs is really an effective spell.

In both sessions I've used various things (rules, char sheets, monster cards, etc) created by the OSR and others.  First, thanks! You Rock! Second, I've now used OSR creations in actual game play that made those games better.  For me, from this point forward, anyone who says OSR hasn't produced anything worthwhile or the like can shove it. "It" being a 10' pole.

Oh and even despite my almost total lack of advertisement and us playing in the back room (and thus bereft of most foot traffic) a half dozen people showed interest and we were able to hook them up with info on D&D meetup and other D&D groups in Austin. If you have any inclination to spread our hobby and an opportunity to play in public I encourage you to do so.  Playing in public really, truly attracts new (and returning) players and grows the hobby.

XP is not divided by number of players.  Find a 1200gp goblet, everyone gets 1200xp.  Compressing many sessions of raiding B2 into one marathon.  It worked well. For example, elves slow progression was an actual penalty, something not normally seen in a one-shot.

Damage by class with more damage if you forgo shield and use a 2h and +1 to hit if you dual wield.  No one ever picked dual wield +1 to hit.  Is it not worth it? Or did I just speed past the description that no one picked up on it.

Death and dismemberment with d12 "hit location" die. For PC's only, wardogs, cooks and men-at-arms bite it at zero hitpoints.  I ruled that magic healing fixed broken bones and reconnected severed limbs.  In retrospect mending broken bones seems ok, it's magic! But, the severed limb thing was a bad ruling on my part.  After using this table in two sessions, I'm still a fan.  But it's not deadly enough, every roll but 2,3,4 on 2d6 is no big deal (if group wins battle).  When using again I will do one or more of the following:

2) modify table, make every roll 7 and under be almost certain death described variously, 8-10 bad, keep 11 as no effect, and 12 as "now I'm angry" adrenaline surge.

Sleep with campfire, hot food, and good rest each character regains their hitdice in hit points e.g. 3rd lvl fg regains 3d8.  If your hiding out from patrolling orcs, with iron rations, no fire or light, sleeping in armor etc. you get only one hitdie.

No critical hits, but when a player rolled a natural 20 I generally described something hopefully awesome sounding e.g. slicing through two kobolds, climbing up the back of the ogre and jamming sword downwards through its neck/shoulder. 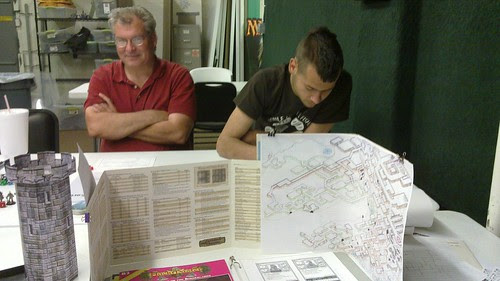 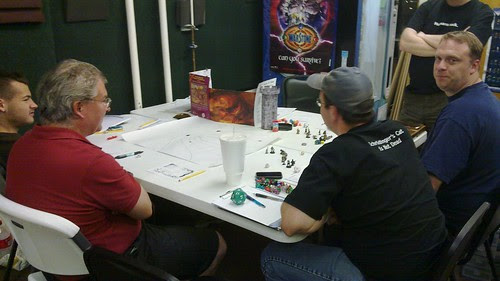 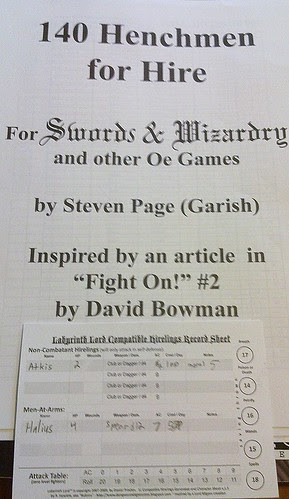 Starting in Frandor's Keep players had opportunity to search for hirelings. 5gp got them a roll on Dungeons n Digressions' LL Hirelings Recruitment Table and Record Sheet.  I also kicked in a magic-user NPC, Onedias. Onedias proffered the following plan "Let's go up river to the Caves of Chaos and loot the place." Having no better idea the party agrees.

I didn't want to do any of the wilderness, side, or in town, encounters from B2.  This one shot was about the caves. Even so, I couldn't just let the players wander willy nilly through the wilds!  1 on d6 means wilderness encounter.  Rolled once on way to caves, once on return trip, and also once anytime players waste time mulling about outside caves or for things such as to see if anything came by and ate their donkeys. [Towards end of evening I quit rolling cause the random encounters had done their job, providing a bit of danger and variety. The players were now really "into" the caves and it was more fun focusing our time there. An example of how I "fudge" things as DM.]

Having forgotten there is a wilderness encounter table in B2 I rolled on the LL one.  Which is pretty freaking dangerous!  I use one roll and look it up on two or more tables (this time mtns, and inhabited).  This gives me flexibility in choosing encounters.  The roll turned up Chimera or Gargoyle.  Both TPK's and not even fun TPK's. Now an encounter doesn't necessarily mean creature has appeared 100 yards in front of party and combat starts.  It can mean hearing creature (players now have option to flee or investigate, thus any TPK is now their choice rather than random FU roll), encountering tracks or other signs (piles of dragon poop are my favorite).  LL has the best mechanic for determining nature of an encounter, The Reaction Roll.  2d6 with results from "hostile, attacks immediately" to "friendly", but weighted towards "neutral, wait and see".  Despite it's utter awesomeness, I didn't use it this time.  I had another "no-good fudging DM" trick I occasionally use.  Here is what happened.

"You hear the bleating of a goat, up the mtn side to your left.  Followed by a lion's roar and a gout of flame shooting out over a ledge." I was impressed that every player at the table instantly knew what creature this was, and more impressed that when I gave them a moment to react most of them fled for cover :) "You hear the lion cry out in pain and see a three-headed beast take flight, trailing blood from a vicious claw on it's flank." More player hiding and waiting.  "Quickly chased by a grey, stoneskinned, batwinged demon."  Waiting until the pair are out of site, most of the party wants to beat it but of course the thief, Blod, needs to see what's what and climbs up to the ledge.  One failed search later Blod decides to  tear apart the nest.  That is when the hidden, terrified, 3HD baby Chimera burns his ass.  One challenging battle later party finds the Chimera's treasure.  I have them roll for it on the spot.  Blod's character rolling for the magic items in a last ditch hope of getting a potion of healing.  He rolled naught.  Thief dead, party returns to town to sell ring with largest diamond they ever saw (Mundy rolled up 1300gp jewelry as treasure).  [btw every minute or so I rolled d6, on a 1 the survivor of Gargoyle / Chimera battle would return.]

For gems and jewels players got full XP but only 80% of value when selling to jeweler.  Arms and equipment are sold for 50% or less if they are of shitty humanoid make, players get XP for sale value.  Art and weird stuff like Owlbear eggs they must find buyer (an adventure in itself and not possible in one-shot) or sell at auction, players get XP for sale value. [Was making this stuff up on the fly, proly shouldn't give full XP value for the gems and jewels. I did cause I awarded XP for those at time of acquisition and I hadn't thought about the 80% sale price yet.  In future I'd not award XP for anything until it was sold for gold.]

Norm's Simple Auction Rule: DM determines potential value of auctioned objects dX+X (although it should not be bellcurved, i.e. a single die).  Each player rolls that.  Highest roll is the highest bid and what the player's receive (minus taxes, tariffs, auction fees etc).  E.g. 3 owlbear eggs were auctioned as a lot.  I decided value was  d12x100gp, players rolled 2, 5 and 11.  Eggs sold for 1100gp! 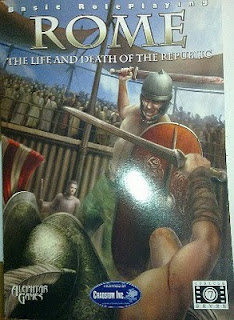 I try to follow the rule "If I play a game at a FLGS, I buy something from that store."  This time I picked up BRP Rome. Cause Rome is always cool, I've been hearing bits about BRP and want to check it out, and I've read a few favorable reviews of Rome supplements lately (although, darn bad memory can't remember if BRP was one of them.  Bunch of peoples seem to have released a Rome recently.)

Ugh, too much for one post, Part 2 to appear later. Also, more posts on B2 Caves of Chaos & maps.