obviously dead apes whose bodies were animated through some sort of necromantic technology -- tubes, gears, and silvery-black replacement parts.

Which gave me the science-fantasy idea that all corporeal undead are "cyborg" constructions.  Mostly skeletons and zombies in all their countless variations.  I've never been sold on undead as a "class" of beings.  There just sort of boring and the ones you could poke always seemed to diminish the incorporeals' impact.

I like having "spirits" be the real "dead" and the "walking dead" being necromantic abominations.  I'm fine with having ghouls just be cursed cannibals. Vampires being somethings altogether unique.  What others are there?

Being associated with necromancy, gives reason for technology to be (wrongly) shunned. It all just fits much better with my world/underworld view and with the science-fantasy setting I'm migrating towards.  Half the reason I'm using LL is cause I think it's a only short hop away from MF.


Hmmmmm, there's amazingly few images of zombies or skeletons with gears and such findable with 5min of google searches. Everything is about the terminator or Gears of War video game. :(


All I could find was this break-dancing samurai pirate. 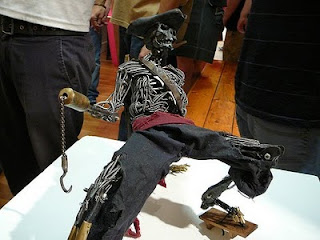