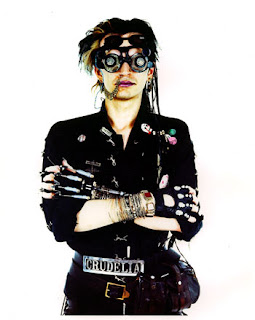 anti-socialite : Criminals, those who intend ill-will towards GBA or it's citizens.

do time : To live. "He does time in Kropotkin."

frust : The small line of debris that refuses to be swept onto the dust pan and keeps backing a person across the room until he finally decides to give up and sweep it under the rug.

kaiser sosayed : Tricked into believing the bad guy is really a good guy, and on your side!.

kipple : Name for areas that are used as dumping grounds (for rubble, trash, etc) and were never rebuilt after 2070.

no-go : [a no-go zone] Area that is not safe to enter. Reasons for this include it's toxic, structurally unstable, or the people there spread SDS.

PRD : [Planned Rural Development] Built, guarded and maintained by a corporation as a peaceful, safe home for it's tele-commuting employees.

rocket sauce : Brand of energy drink. Anything that is good and powerful.

SDS : [Sudden Death Syndrome] An affliction suffered by those who habitually piss-off the wrong people.

slice and dice : A fight involving knives or swords.

some kind of a whack : It's stupid.

speed is of the serious essence : We need to hurry.

tweaked : adj. Under the influence. verb. To take physical enhancement drugs. "Don't fight Sweeny he tweaks and will rip your head off."

uber : Massively cool/powerful, above the best. "The uber demon kicked both slayer's ass."

uberkid : A phenomenon affecting 1-2% of new births. They are super-intelligent child prodigies whose accelerated development leads to accelerated death. None has lived past their 26th birthday.

unregulated : Areas controlled by corporations. Named because the are not subject to governmental regulations.

what's the what : What's going on?

wiggins : The state of wigging out. 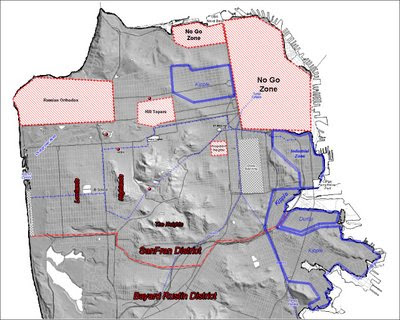 Part (the ass part) of the GBA. It is crumbling home to 120,000 living and an annoying number of unliving. Franciscans are none the less prideful of their home and consider life elsewhere a waste of time.

The Plant
The public power system helps the GBA to hold the many factions and enclaves together postquake. Consisting of several wind, solar and tidal generating facilities scattered throughout the bay area. The big producer was still is a cold-fusion power plant. Although, several facilities and large parts of the grid where destroyed the fusion plant survived and served as a focus for the fledgling GBA.

Downtown (aka Deathtown)
Downtown is a rubble strewn, sinkhole happening, building collapsing, place you don't wanna be. Most citizens consider it no-go. Only ferals and anti-socialites do their time here.

Tunnels
Parts of BART, BART2, MUNI and other tunnels that survived the Shake & Burn provided relatively safe and easy method for travel and communication. The Bay Tunnel is flooded. None of the tunnels have operating trains, strictly pedestrian.

SF Authorities - SanFran council & militia, the Rainbow Patrol. SF is more isolated than other parts of the GBA. And, a lot of people still end-up dead, hrmmmmm.

The Lees, The Chans - The two biggest gangs of SanFran are these rivals. Their throw downs rarely result in serious harm to themselves, others, or property. They are mostly left alone since, the local council recognizes the value of having large numbers of trained combatants.

Rosicrucians - The Rosicrucian museum of San Jose was unscathed by the shake and burn. Curious, that.

Mormons - Various factions, maintain "safe houses", churches and conduct "Missions" throughout the GBA. The opposing factions often get medieval on each other. Then the Authorities have to come out and lay down some secular whoop-ass.

The Russians - An enclave in the Avenues remains independent of SanFran and the GBA. Ruled by the leaders of the local Russian Orthodox Church. The GBA certainly isn't going to force them in and they maintain peaceful if aloof relations. Inhabited by peeps of predominantly Slavic decent, strongly xenophobic, strongly religious.

The GBA encompasses most of The Peninsula, East Bay, and South Bay. It is hemmed in the east by the Coastal Hills Range, in the north by El Cerrito, and includes all of San Jose in the south. These are not fixed, recognized boundaries. They are the places in which more people claim to be part of the GBA rather than part of something else. Within this area are many large and small tracts that are uncontrolled, controlled by other entities (IAT, Corporations, Government, Independent Townships, etc.) or are just not fit for continuous habitation. 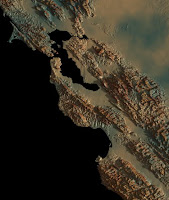 Formed out of the people who had not abandoned the Bay Area before and who lived through the Shake and Burn. Neo-hippies, anarchists, libertarians, cypherpunks, survivalists, technopagens, cultists, crusties, crunchies, FOB's, freaks, and a medley of other sub-cultures. They share common attributes of DIY, freedom, independence, multi-culturalism, equality, and being shunned everywhere else.

The GBA is divided into districts. Each district has its own locally elected council, a militia, and is largely self-governing but all subscribe to "The Universal Declaration of Human Rights". The GBA itself has an overall council elected by its citizens and a "militia" which is more of a standing para-military force than the district militias.

A tough place to live, the GBA is walk in the park compared to most unregulated areas and in its citizens opinions far better than being a corporate drone.


Alcatraz Island
Seized by the Indians of All Tribes (IAT) in Nov 2069, on the 100 year anniversary of the first Indian reoccupation. Since the Shake and Burn IAT has heavily fortified it with low-tech,
hi-tech and magic. It is a no-go zone for non-indians. Violaters are killed dead by organized, trained, and buffed Indian warrior braves.

Miwok Island (formerly Angel Island)
(Re)occupied and developed by IAT starting in the summer of 2072. It provides grow-food
land, living space, and is the epicenter of tribal life for the IAT. Non-tribesmen are unwelcome but not killed on sight.

Marin Headlands
Not part of GBA. The IAT has several camps and grow-food areas here. There are also several well-defended corporate PRDs around the North Bay.


The World (cliff notes version)
Bay Area folk are concerned with local issues such as "will my home still be there". Peeps don't travel much anymore. Why stress when every needful thing can be had over The Net. No muss, no fuss.

The rest of the world is Mootvile to them, but here is what is known.

Corporate Lands
The area that was formerly California, Oregon, Washington and a few other states, is now corporate controlled or "`slang|unregulated`". A very few independent townships struggle on. The state and local governments themselves have been voted out of existance(privatized). Much of the rest of the world has suffered similar corporate takeovers.

USA
What remains consists of the Northeastern, Midatlantic and most of the Midwestern states. Corporations control everything through Federal and state government proxies.

EU
A govermental facade. Ruled overtly and absolutely by corporations.

Canada
Around 2037 Canuks saw that they liked Szechwan food and disliked being threatened by the USA. Meanwhile the PRC took note of Canada's enormous freshwater reserves and vast empty lands. Soon the Sino-Can accords were signed. After years of immigration, mutual defense, joint space exploration, Martian colonization the PRC and Canada are like brother peas in the co-prosperity pod.

God's own Republic of Texas
Texas, N. Mexico and most of the Southern states.

The Free State of Utah
North of the RFSU.

The Real Free State of Utah
South of the FSU.