I've mentioned before how I create little cards for magic items (and in my latest campaign objects d'art and gems). Thought I'd share a few despite being utterly embarrassed at how atrocious my hand writing is. Really loved making these even though it became a lot of work. I'm no artist but I like to think my players enjoyed getting these as loot anyways.


Below are a few examples, more can be found on my flickr page. These are blank white 3x5 cards cut in half. I store them in 3 ring binder card sleeves (used for collectable sports cards, MtG and the like).

I cut out a potion bottle stencil from thick card stock which I use for most "potions". The Enbiggen "potion" happens to be a little ball of cake and not an actual bottle. I used different colors and mixtures for each potion. I actually worked out a semi-logical system of potion smell/taste/appearance so they could be identifed. But, my players were so not into that kind of play. 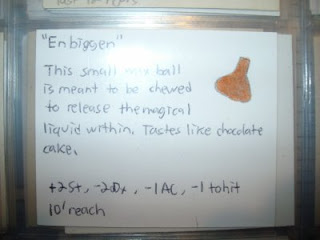 Sometimes characters knew what they got. So name/stats went right on the card. Other times stats would be added later, as they were discovered. 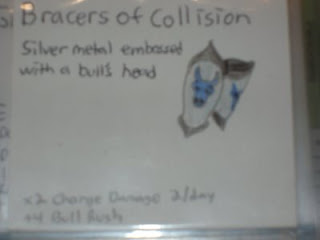 I really liked these vases. They came from the Tomb of Uro-o-Nubi, a Sun Kingdom (Egyptian culture, snake people) Governor. The designs on these hopefully helped generate the correct atmosphere. They also establish a Sun Kingdom style which came into effect later when the players were able to identify items as being from the Sun Kingdom based on their little drawings. Not via a skill check or with any DM intervention at all. Campaign clues were hidden in the designs and hieroglyphs. Instead of pursuing that the party decided to sell off this "junk." These were some of the most valuable items found but the party thief didn't think about it and got totally robbed (10% real value) by crooked merchant in the Bazaar. 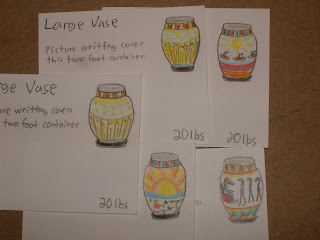 A wand of healing made by priests of Mylien. I sometimes put a flavor phrase on items to poke the players' imaginations. When you have an entire world to describe to players it helps to create reoccuring themes. Such as the "Mylien loves you." which her priests say, and is carved on her temples and on all most healing magic items. Also garlic is her holy symbol and wildly regarded as a healthy, healing herb. 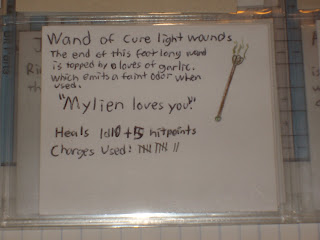 Some scrolls, couple rings, unknown staff, misc other loot. I made many blank scrolls and potion cards to use for quick treasure during games. Other loot was either pre-made by me or I gave the player a temporary card with just name of item scrawled on it. I have a small collection of these now. Not nearly enough though :) 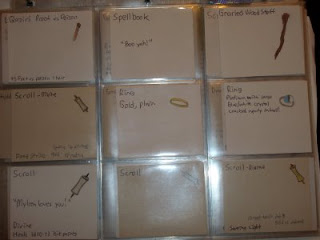