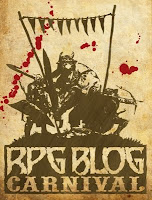 SteamPunk is not my favorite genre, this will probably be the worst RPG Blog Carnival contribution ever. I despise tech vs magic (which is usually done in the name of "balance") settings/systems.

Troika's Arcanum is an excellent SteamPunk / Fantasy computer RPG. It has a posse. You can probably find a copy "around". The Diamond Age is a sort of reverse SteamPunk (highly advanced civilization reproducing Victorian society) sci-fi novel that is pretty good reading.

I blogged about a steampunk campaign based around the characters operating a train. Called Fantasy Rails inspired by Iron Dragon board game and a RPG I played in at the Seattle Game Con. I was into it until Eberron & everyone else did steampunk.

Players operate a train, hauling cargo, taking odd jobs, slowly building up their train's capabilities and power. If "Firefly" was cowboys in space this is Firefly on a train in steampunk fantasy land. The party would start with a 2nd hand, old, broken down. simple engine + tender, falling apart, crappy, war surplus caboose, and some coins to customize/buy rolling stock. The goal would be to haul cargo, do jobs, raid the occasional indigenous peoples (aka orcs) camp earning enough coin to maintain and upgrade their train. Thus opening up more dangerous and lucrative jobs.