[BuffyPunk Campaign I developed and ran a one shot in 2004. I read several cut scenes to the players. They helped set the mood and introduce complex setting to the players (being a one shot was not time to roleplay all the background). They provided suitable segways between interesting bit of action. Buffy RPG also has this whole shtick about being a TV show, episodes, actors, supporting cast etc. The cut scenes fit right in. It's a useful technique if you have any writing skills at all (I hope I do)]


Cut Scene One "The Picnic"

A pale, little girl of no more than eleven years carefully smooths her pretty white dress, with its frills and cute pink belt that matches the ribbon in her blond hair. She knows her guests lack the mathematical aptitude to notice the geometric equation she has formulated on the spotless white tablecloth. Even so, her blue eyes sparkle with satisfaction at the splendid array of saucers, cups, tasty morsels, steaming tea, soy-milk, cubed sugar, napkins, and Wendy's favorite, itsy bitsy little silver spoons that twinkle in the sunlight.

At the center of it all a simple cream vase demurs to the beauty of a single daisy. Freshly grown by the the senior biology class, each petal a different unnaturally vibrant hue. Another of Wendy's favorites, brought just for her by Mr. Delgado. Who is again looking protectively towards her. She brushes a lock of hair from her eyes and favors him with a reassuring little smile. He removes a black wool hat, revealing a short, dark, and handsome head of stiff hair. Graying at the temples in a most gentlemanly way.

Bowing deeply, he returns Wendy's greeting and places his cane carefully within easy reach. But even before removing his fine gloves his illmannered attempt to pilfer a buttery cookie was halted with a quick eep and stern look from Wendy. Mr. Delgado would have to sit, patiently, until Wendy said it was time to have cookies. What could he have been thinking? The tea hasn't even been poured yet! But, she must attend to that shortly, Queen Pickles had started chewing on her napkin! 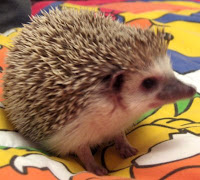 Wendy sighed, accepting that her dress was as smooth and straight as it possibly could be and poured Mr. Delgado and herself each a hot, rich brown cup of dragon tea. From some hidden place she produced a cherry tomato. Queen Pickles ceased the unseemly napkin chewing and fixated on the new shiny red treat waved in front of her. The Queen's attention was rewarded and soon she was sloppily and noisily in sweet tomato bliss. Giggling, Wendy next presented several bright green leaves of lettuce to the distinguished Mr. Shuffles. Nearly as distinguished as Delgado for he also had a fine hat and gray fur, lacking only a cane. Queen Pickles was already nudging Wendy for another tasty treat.

Owl had to admit that this was a very pleasant party and the nice little girl was definitely of the white side of things. But, Owl couldn't very well leave unmolested such a plump rabbit peacefully munching away right underneath his branch. He was after all, Owl. So, Owl unfurled great brown wings and silently left his piny perch.

Mr. Shuffles stopped chewing, he had that feeling. That feeling only hunted get, the feeling that only hunters give. He hopped once, all the way onto the table. Then turning three quarters of the way around pushed as hard as his hind legs would push. On the way to the ground, something yanked off the stoopid hat Wendy made him wear and his left ear stung painfully. He heard Wendy screech and call out his name. But, there was no time for any of that. Mr. Shuffles was busy executing his famous "Hippity Hop This way an That" maneuver.

"Oh no!" Wendy thought, that naughty owl scared Mr. Shuffles. Scared Queen Pickles too, but she has sense enough to hide under the table. No doubt curled up tight, spines all out. With a quick twist she threw her tea cup up after the owl but he was already lost to sight, even a slayer's. Wendy forward flipped out of her chair, over the table and was off running after the rabbit. She ignored Delgado's warnings, pleadings, and lastly his admonishments to return. Her pretty pink ribbon caught on a branch and was yanked from her hair. It swung briefly in the ocean breeze before Delgado retrieved it. Folding it neatly and sighing, he placed it in his vest pocket. Checking his watch he was extremely alarmed to find it suddenly after dark.

Wendy stopped, her hair did not. With a hefty puff from her lower lip she blew the blond mess clear from one eye. She brandished a tasty orange carrot, pointy end towards the trench coated figure that blocked her path. She didn't recognize this one but she knew the type, heavy boots, lots of black, lots of leather. Not much trouble usually, but this one had it's clawed hands wrapped round a quivering mass of distinguished gray fur. She was preparing a suitably threatening threat when Mr. Trenchcoat burst out laughing.

"Lil girl, did you not get the memo? Carrots, do jack all against us vampires."

This prompted a laugh from another just walking up. His laugh was guttural, the kind that only comes from being raised in "Asswipe" Mississippi. This one Wendy knew all too well.

"Uh huh, get it boss? Leading with carrot, hitting with stick. Huh huh."

"Shut up Cleetus." said the trenchcoat.

Wendy said to Cleetus "Thanks for reminding me."

Wendy let go of the carrot and toppled forward into a cartwheel. When her shiny black shoe was far overhead she grabbed a stake strapped to the back of her thigh. Ending her tumble in "the splits"; right leg out, toes expertly pointed, right arm perfectly parallel. Coach Byers would be proud. The stake, propelled with all her forward momentum, penetrated more than halfway into Trenchcoat's chest. A small puff later he, fashion crime outfit and all, turned to dust. Wendy jumped up, not even pausing to brush away the dirt and needles her gymnastics had attracted. Cleetus was dumb, dumber than dirt, but he knew when to run. By the time Wendy was hugging Mr. Shuffles safe and sound he was long gone.

Ewwh! There was slobber all over Mr Shuffles ear, that nasty trenchcoat had been licking all the blood off Mr. Shuffles talon wound.

Back at the picnic area everything was smashed and scratched into the table was a note from Cleetus:

"We gots D. who dummest now"
Wendy burst into tears. Queen Pickles didn't quite know what to do with Wendy so upset. So, she rubbed her tiny wet nose on Wendy's wrist.


Wendy woke up with a frown. Mr. Shuffles was hiding under the warmth covers as usual and Queen pickles was nudging her wrist impatient for morning treat. "What a poopy dream. I won't pay it any mind at all. Today is my birthday! la la my birthday! me me birthday la da dee." she sang all morning getting ready for school


[The characters started at school, during lunch break, Friday before Spring Break. There was a little set piece where each character got introduced highlighting their "thing".]

A nice sunny day, birds are chirping, air is sweet with flowers from the garden.

Mannie, Mia, Gunder hanging in the school courtyard during lunch, various kids and teachers are milling about. Wendy comes skipping up. "La la la. Perfect the last three of my deliveries" "you, you," doing a cartwheel and flip "and you." "Don't be late, la la la" she sings skipping away.

[The birthday invitations were real props, it was fun NPCing Wendy. Then some time for PC roleplay after which the bell rings. Skip to some action, an encounter, on way home, small earthquake that evening. Next time, Birthday Party!]