One of the joys of DMing is providing a rich backdrop for your campaign. A few details consistently applied brings your fantasy to life. I believe the word is verisimilitude. Being personally bereft of imagination I find inspiration in the real world's history and freakishly diverse culture. Collecting images, fonts, peculiar links, songs anything that one day might provide a succulent detail or kick start my creativity.

This collection has a name and it's Flavor.


Wikipedia is great for short overview and factual semi-academic treatments. But, we want far-out stuff dripping with bizzaro details. Such as the Sacred Texts Archive of the worlds religions, cults, mystic societies, and what not. Mostly prime sources and 19th Century and other out of copyright texts. Often written in archaic style that fits into many genre's. A couple of titles to pique interest;
"Fictitious and Symbolic Creatures in Art"
"The Book of the Sacred Magic of Abramelin the Mage".

That monkey needs a raygun!
Twilit Grotto: Archives of Western Esoterica is similar to Sacred Texts but focused on European, mostly Renaissance era, High Weirdness. I'm attracted to Occult symbols and esoteric GIF's but other sections include "Classical Grimoires", "Black Magic", "Sigillum Dei Aemeth", and "Giordano Bruno (1548-1600)". If you're at all into people such as Wilhelm Reich, Robert Anton Wilson, and haven't already read Giordano you probably will dig him. 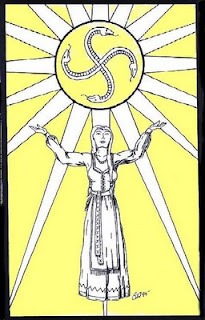 All things Alchemical "...over 2400 sections and providing tens of thousands of pages of text, over 2500 images, over 240 complete alchemical texts, extensive bibliographical material on the printed books and manuscripts, numerous articles, introductory and general reference material on alchemy." All I can add to that is Bam!

Mythologies? Start at the Encyclopedia Mythica. It covers the world's mythology, folklore, and religion all scholarly like. For the Olympians and friends this Family Tree (Zeus sure got around) is hard to beat. But if you like your gods fancy this interactive Greek Gods Tree might suit better. 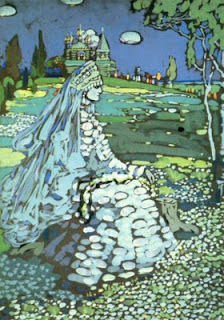 Need more Heroic Journeys? D. L. Ashliman from Pittsburgh U. has collected an ass load of Folklore and Mythology Electronic Texts. And fear not stuffy, academic drool the first entry is Abducted by Aliens. "The aliens in these legends are not men from outer space but the underground folk: fairies, trolls, elves, and the like." I approve.

Eastern European history and culture, a source that is much too neglected by RPGs. Dancing Chicken Leg Hut, come on even without ray guns that is cool! While working on a yet to be played Russo/Slavic campaign I did a bunch of research (aka surfed the Interwebs). Sadly most the links are dead. These survived:
60 Slavic Folktales -- Medieval Russia Links and Research -- Lithuanian Myth -- Period Russian Names.

Enough fluff, time for some hard and fast. On the use of Tarot Decks in RPGs. Get your cryptic languages and elder fonts from Omniglot guide to written language. Learn what a Citirine actually looks like along with some surprising facts at www.gemstone.org
Mostly Rolemaster and friends the Guild Companion will occasionally feature generic or easily adaptable material. Such as this fascinating article on antique weights, measures, and currency.

Get your Troll On!

Most every Wednesday I'll post a semi-thematic selection of links from my wanderings.