Follow up to the Fun School Rockumentary, aka best D&D Video evar. Which just got an extra dose of awesome sauce! According to these comments by Stuart 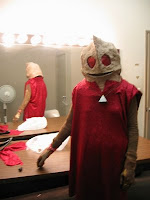 "That video was edited by Riley Swift of Dungeon Majesty / Telefantasy Studios. The music was composed for the video by one of the guys from the Metal Band 'Crom?'."

Not sure that is the right Crom, they're a much heavier deathmetal sound than the D&D video which seems power metally. But, I do not lament nor am I a princess so, wtf do I know? This Crom is maybe the one to blame instead. Hell probably some other Crom entirely. I mean there's got to have been a couple hundred or more metal bands named Crom. 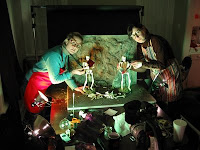 Whatever. OMFG Dungeon Mastery! A public access TV style show of four young ladies and a DM playing D&D, acting out scenes, replete with fantabously awesome type cheesy green screen, models and FX. Guess I don't get out much cause the show has started and been done a couple years now. Some images from their gallery. The show trailer and several clips below. Along with video from each Crom at the bottom. It's better than bad it's good!