I forgot my camera, so no blurry photos.

This past Saturday I went to my FLGS to attend the third? annual Free RPG Day . While there I bought the pocket edition of True20 and yet more dice. I almost snagged the only copy of Labyrinth Lord but I'm not sure it's the system for me and holy cow are RPGs expensive in the store! I wanted many other modules and rule books but at $19 or more for an adventure and $40-60 for a rulebook I can do without. In the evening I played 4ed D&D for the first time read about it in my previous post. During the day I played Shard, twice! What follows is possibly inaccurate preview based on being a player in about 5 hours of demo, the actual rule book is debuting at Origins.

My very first impression was furry / over the top anime and it was hard not to run. But I'm glad to have made my will save. The world of the false dawn is a very interesting setting. That is if your interests reach beyond the pseudo-medieval that 90% of fantasy RPGs adopt. Shard is picturesquely set in an Indian/Chinese milieu gushing with unique flavor (there's even an detailed fantasy realistic explanation for that and for why there's a bunch of anthropomorphic animals running about). Although it is set up for cinematic heroics, it's not really anime inspired and thankfully lacks ridiculous giant swords, big eyes/boobs, and other adolescent maleisms. It seems to based heavily on actual Indian/Chinese mythology, history and culture to great effect. Too many unique settings are "bad weird", full of anachronisms and inconsistencies. The other thing that hit me as I sat down at the table was the lush colors of the gorgeous art. Art inspires my creativity and helps craft the mood of an RPG. Shard's art is full of color, oriental mystery and fantasicalness. 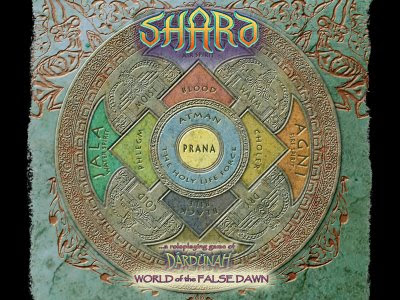 The demo was run by Scott Jones, local Austinite and co-creator of Shard. Nice guy and fine GM. The game has been a labor of love for Scott and Aaron de Orive, the other co-creator, crafted over many years from actual game play. They have produced a very nice rulebook, irrc 360 pages, $40 (which is very reasonable for a full color hardback of that length), and several supplements. I was pleased that the world map which unlike so many RPG maps was created by someone who knew at least an inkling of geography and climate. That attention to detail and research seems to be consistant throughout the setting.

There all no humans, characters are all anthropomorphic animals. Of which there are 90! to choose from and 90 more in an expansion. That is big ass 'A' Awesome. The demo characters included a 12' tall elephant honor guard, a turtle mangi (priest), a mocking bird archer/huntress, a wolf suthra master, a condor seer, and a snake assassin. Shard is a point buy system with option to start players at any power level from peasant to mythic hero or even as children which sounded very interesting esp, perhaps, for those gaming with their children. [Playing child animals combined with a colorful (literal and figurative) setting sounds like it would be very attractive to little peoples. And introducing foreign cultures and beliefs is what I'd want to do with my children.] The world has firearms of the black powder, flintlock, blunderbuss variety. All manner of stone, crystal, chitin (metal is vanishingly rare) melee and thrown weapons. But martial arts is a primary method of physical negotiation. I could see a combat driven campaign or one were violence was a background detail. Instead focusing on the complex caste, family, honor codes built into the world and characters.

Ok, some talk about mechanics, although brief and vague cause I only know about what I experienced in demo. In a sentence Shard appears to be a cinematic, heroic, low magic, storyish (as opposed to sandboxish), crunchy, d6 dice pool RPG. Build points are also story points (used for the usual player narrative control things) are also experience points. Four page! crunchy character sheet. Don't have experience with dice pool mechanics but this one seemed nice. Never too many dice (12max, 5-8 normally), all d6's, 456 are successes, 6's after the first explode, 1's with no successes = fumble/bad stuff. Two successes for full success, one for partial, more than two equate to increasing levels of "I kicked ass". Difficulty adds/subtracts number of dice rolled. Opposed actions, opponents successes are subtracted from yours. Maybe there's more in a full game but we didn't play with a lot of modifiers or options (there were some for combat to attempt various stunning, locking, breaking martial arts moves). For the most part it was look at my skill/trait/ability roll that many dice, tell GM number of successes, DM tells you what happened. So, play was fast, lite and loose. The crunch seems to be nicely tucked away in character creation/advancement or on the GM's side of the screen.

I was impressed with the conflict resolution system it plays fast even though it was fairly crunchy and wasn't' actually all that fast. Basically everyone rolls initiative and determines the number of actions they get that turn. On their turn characters spend actions to do stuff, draw weapon, move, leap onto chandelier. The trick that made it seem fast and keeps everyone involved is that after each action any and all characters can react with one (and only one) action of their own. It plays out nicely action, counter-action. Unsurprisingly much like the action sequence of Kung-fu movie.

I'll definitely buy the rules when they hit retail and maybe the Magic & Martial Arts supplement (two of my favorite subjects). Also, strongly considering wrangling some players for a one-shot to explore the system in detail. But frankly, I'd be fine with lifting the setting, the 90 freakin animal templates, cherry picking some mechanics, dropping the whole thing in the system of my choosing and rocking out! Maybe put it in a bottle, other side of shimmering portal, or bottom of a rabbit hole. Dungeons day in and out can get dreary. Need a touch of fantastic oriental exotica, Shard delivers.


Shard check it out, intro rules, adventure, and demo characters! 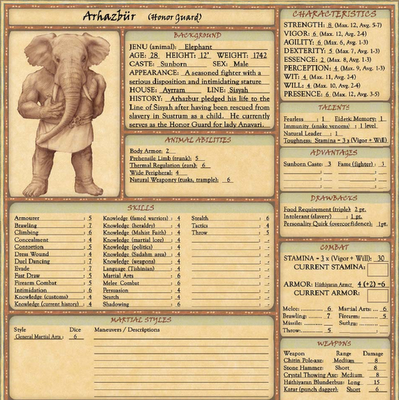