The old-school is getting legs. Wasn't someone just pointing out that they wanted the "industry" to support play by churning out adventures? Well here you go. 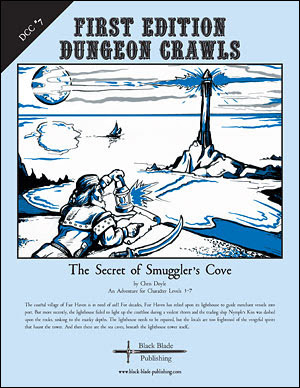 First Edition Dungeon Crawls: Secret of Smuggler's Cove will be initially released at the North Texas RPG Con in Dallas, TX, June 5-7, and will be available for purchase directly from Black Blade Publishing immediately thereafter.

"The old school gaming community continues to build momentum. Some of the more forward-looking members of this community are focused on expanding their love of the hobby by looking forward toward new fans, not only backward toward nostalgia. Jon Hershberger is one such person and I'm glad to be working with him on his Black Blade adaptations," said Goodman Games President Joseph Goodman.